Unplanned trips are fun. While I was figuring out a place to see the fall foliage, a friend invited me to her home in Connecticut and suggested we travel to the White Mountains in New Hampshire. In less than 12 hours I was at her place, and the following morning we were driving to Franconia Notch.

The best way to enjoy the changing palette of the deciduous trees is by going on an Autumn drive. We drove from New Britain to Franconia via Massachusetts; a 3-hour long breathtakingly beautiful drive. 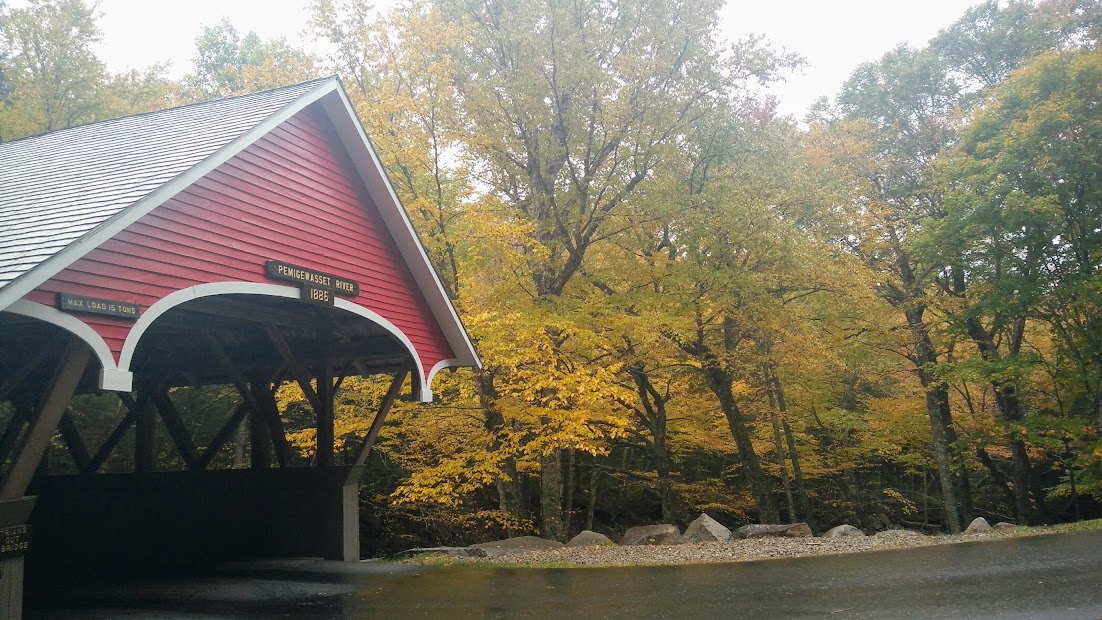 Light drizzle welcomed us to Franconia, and we were visibly disappointed to see the cloud-clad mountains for fear of missing the vibrant colours of the season. Nevertheless, we began our 2-mile self-guided nature walk, while it was still drizzling. The state park is open 8:30 AM through 5 PM and admission for an adult over 13 years of age is $13. Bus service traversing a part of the park is also available. 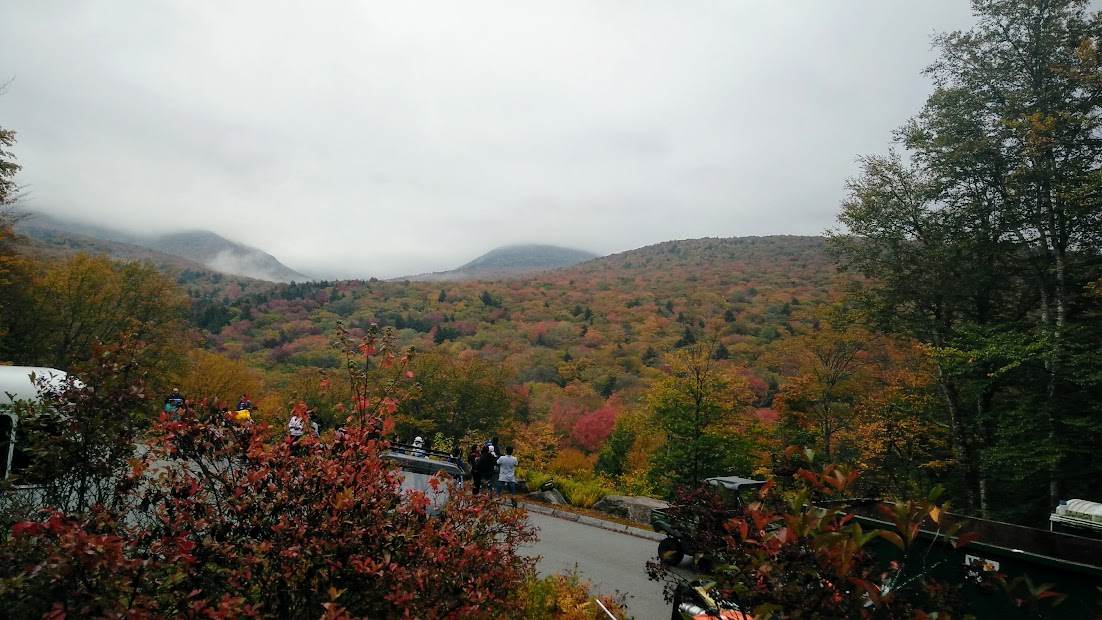 View of White Mountains from the Flume Gorge Visitor Center

Flume Gorge is a natural gorge at the base of Mt. Liberty. The two-mile loop which includes a lot of stairs and uphill walking allows a closer look at the growth of mosses, ferns, flowers, boulders, and walls of Conway granite. Along the walk, we discovered waterfalls, bridges, a stunning pool, and incredible mountain views. Clouds had slowly started to clear by then. 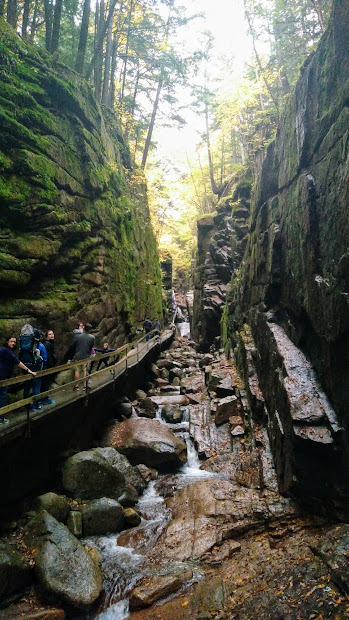 We learnt from the markers placed at many places in the park that the granite rock which makes up the wall of the flume was formed many millions of years ago. Molten lava filled the cracks formed in the granite and eventually solidified to form dikes. As age passed the main dike was worn away leaving the flume gorge. Frost and water action has further widened the flume. Something seemingly abundant on the walls of the Gorge is Lichen, a leaflike plant which is algae and fungi living together, dependent on each other for survival. They obtain their food and water from the air and thrive in the moist condition of the Gorge. 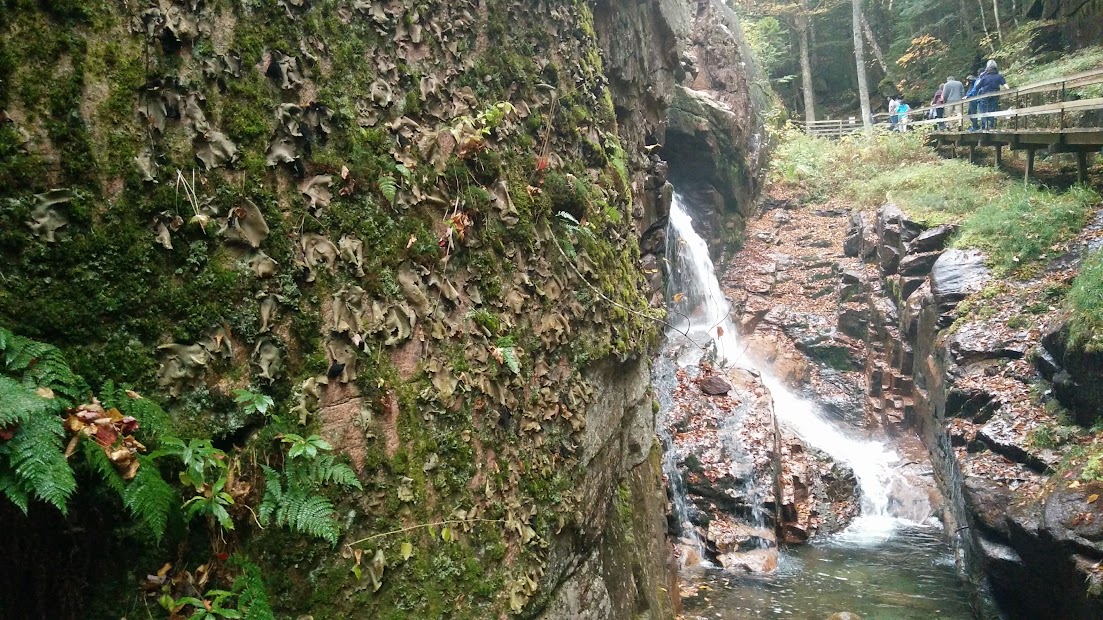 Lichens on the walls of the Gorge

The highlight of the trail was Sentinel Pine Bridge and Pool. A silt-laden stream flowing from the glacier has formed a 40 feet deep basin in the Pemigewasset River, which is now called as the Pool. On the cliff above the pond stood a Sentinal pine for centuries, when the tree was uprooted during a hurricane, its trunk was used as the base of the covered bridge which today offers a beautiful view of the pool and Liberty Gorge. 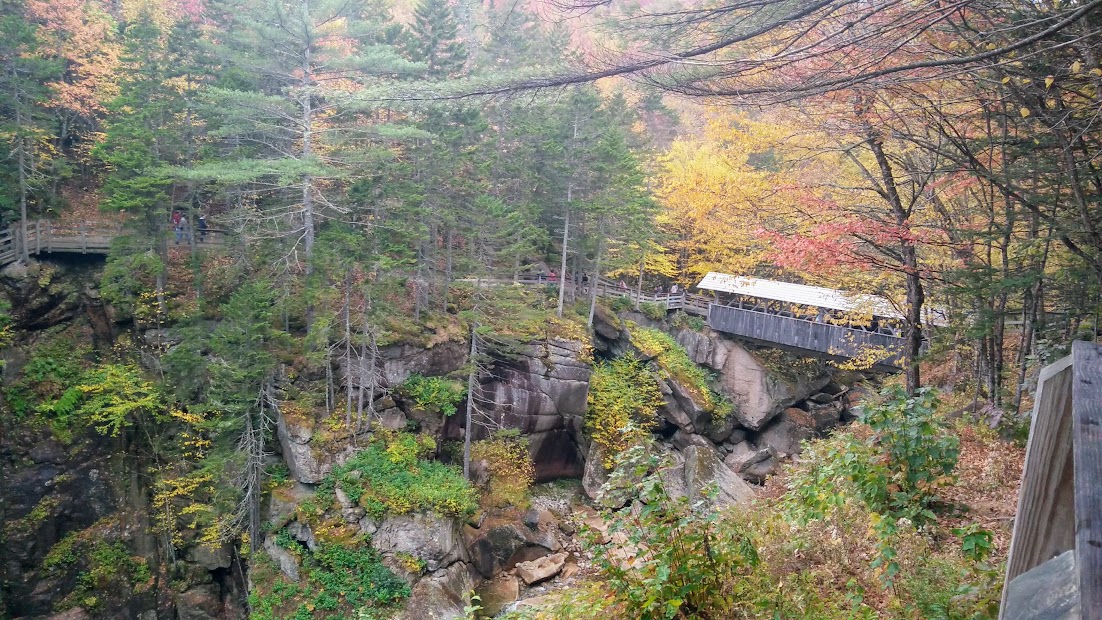 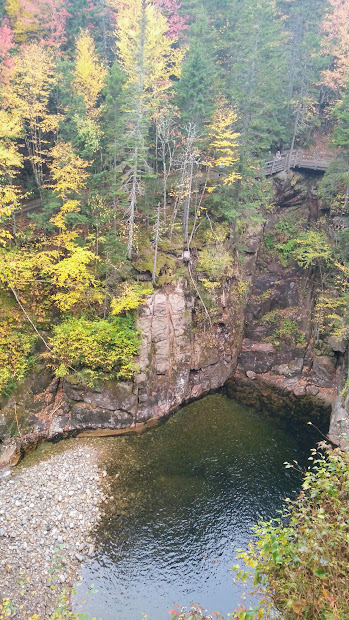 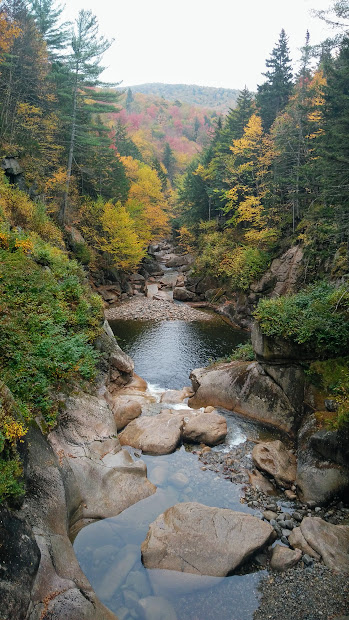 View from the bridge

As we walked through the area, we noticed many boulders, some very large, also called as glacier erratics, rushing water exposing large outcropping of rock called Table Rock, varied colours of the deciduous trees, and a panorama of White Mountains. 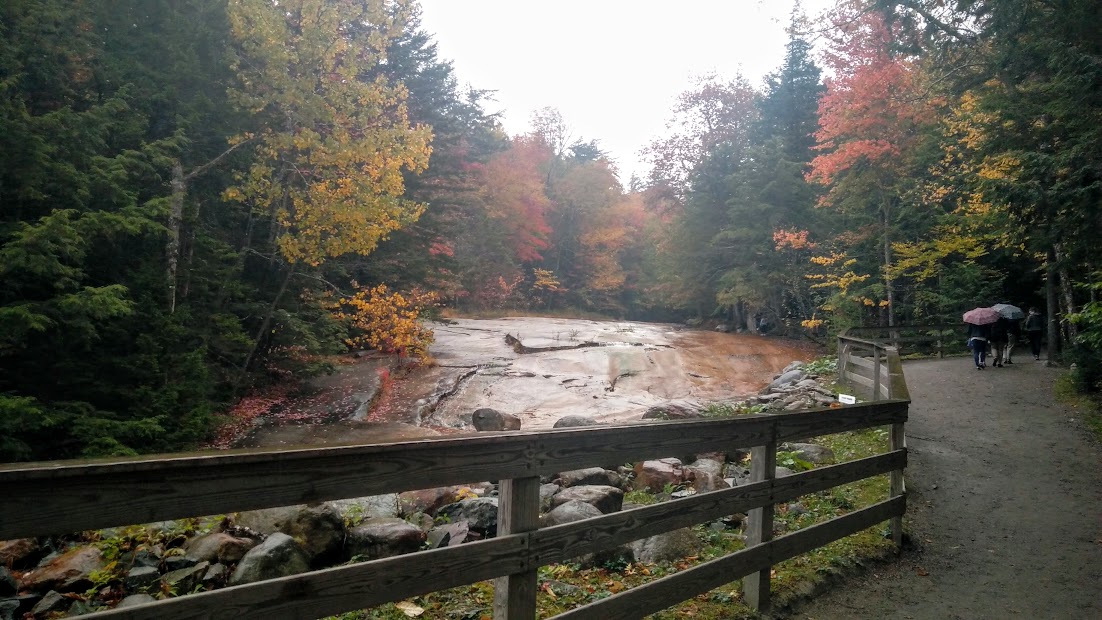 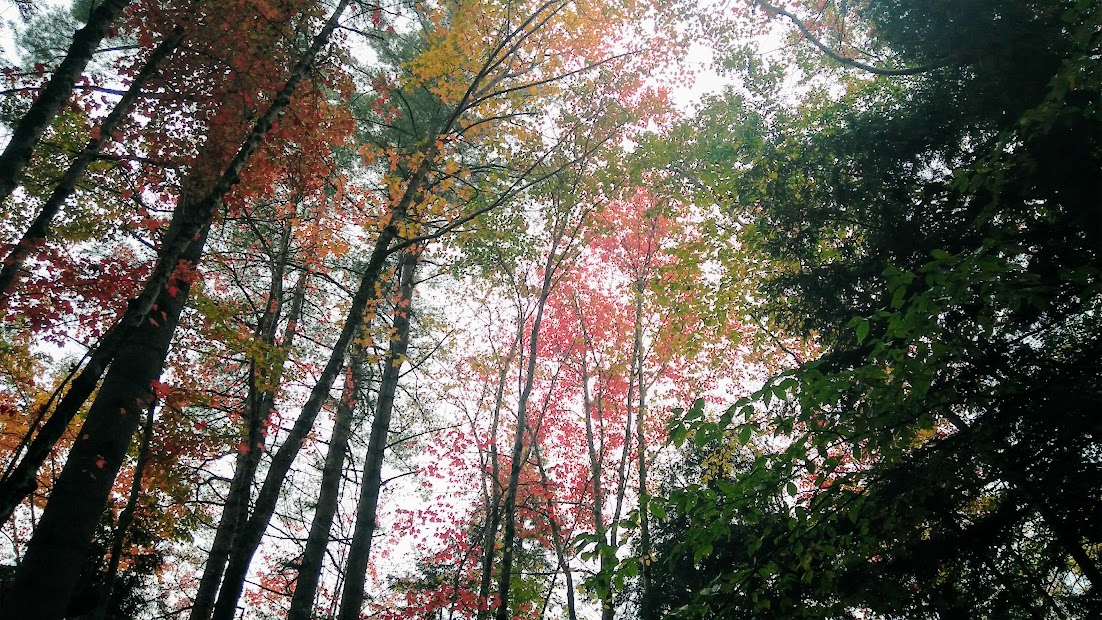 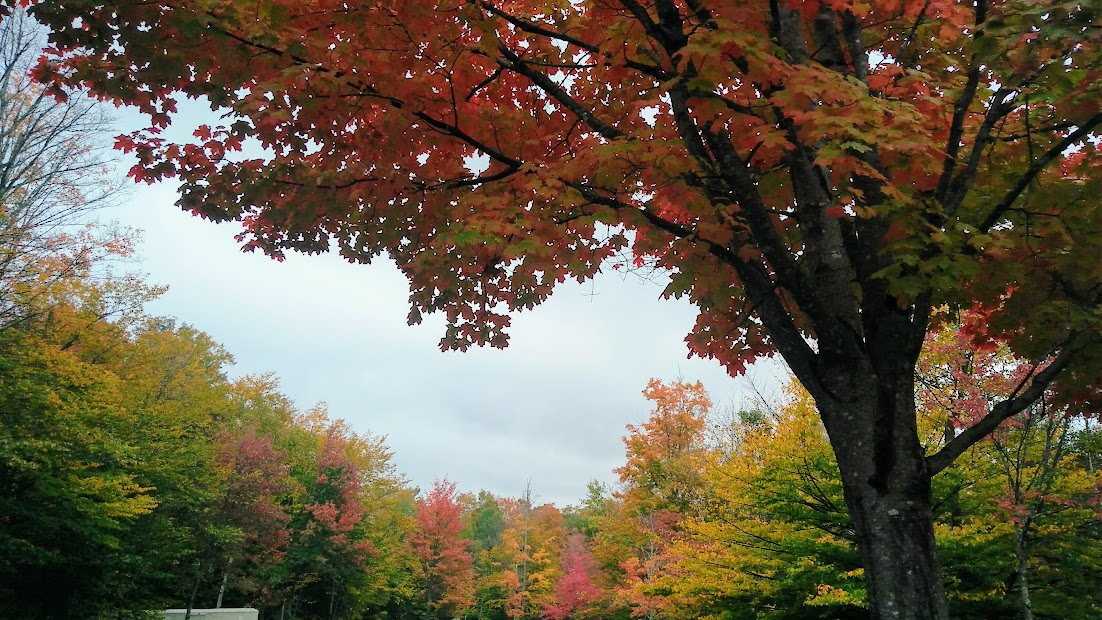 It’s advised to pay a visit to Mt. Washington which is close to Flume Gorge; Cannon Mountain, located within the Franconian Notch State Park; ride the aerial tramway here or take a boat ride through Echo Lake. If you are planning a more extended stay, you could as well travel to Vermont. 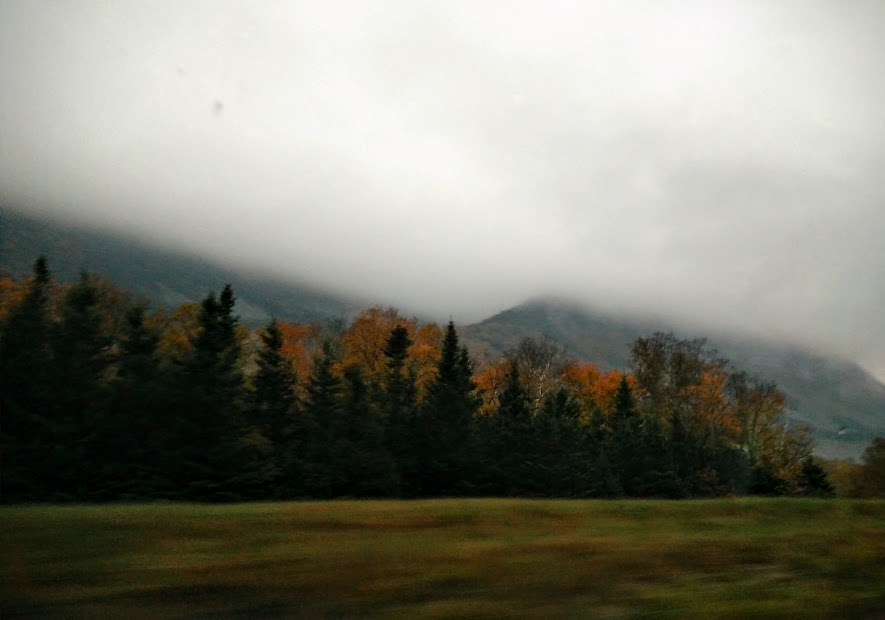 We drove around until sunset, taking in the reds and oranges in spots and the charming mountain views before heading back to Connecticut.