Recently, I made a quick trip to Virginia to visit a dear friend. A 4.5-hour bus ride from Port Authority NYC took me to Union Station, DC. You may as well drive or ride Amtrack or fly into DC, depending on your proximity. Union Station is a transportation hub in Washington DC and a landmark in itself. Never had I been to a station very monumental in looks. Stepped out of the station to see the United Stated Capitol illuminated. My admiration for DC had just begun!

With just three days to take on the town, we found ourselves gallivanting the nation’s capital – Washington, D.C. The iconic city of D.C. borders the states of Virginia and Maryland is easily accessible by Metro. 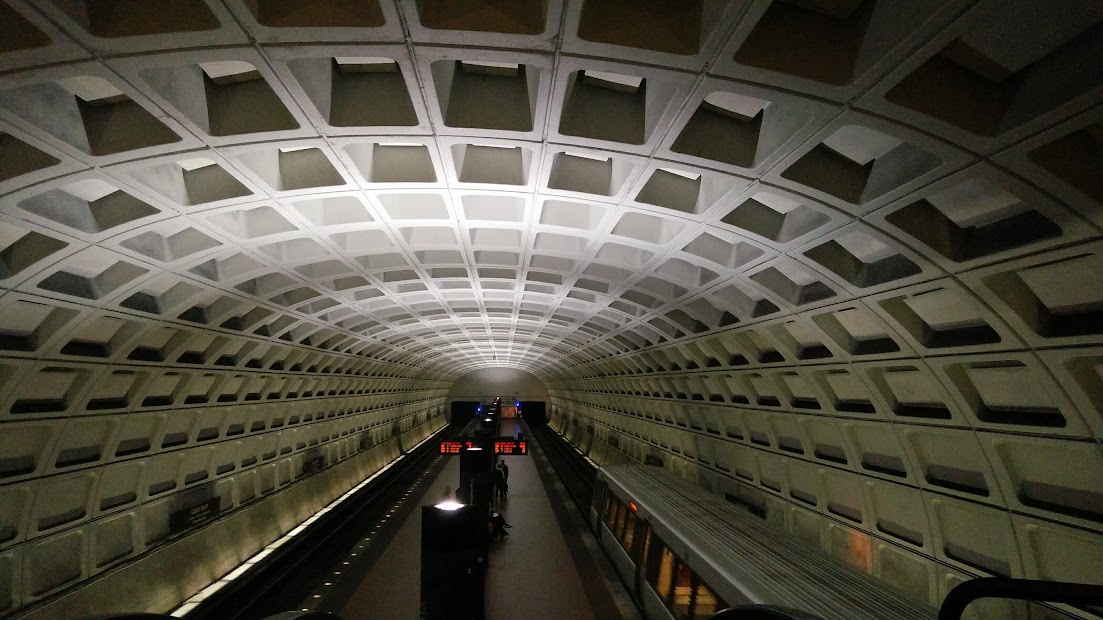 People who know me well know I have a thing about libraries and the US has 5 of the top 20 largest libraries in the world! The Library of Congress, the second largest library (according to Wikipedia), and the National Library of the United States was numero uno on my list of places to visit in D.C. 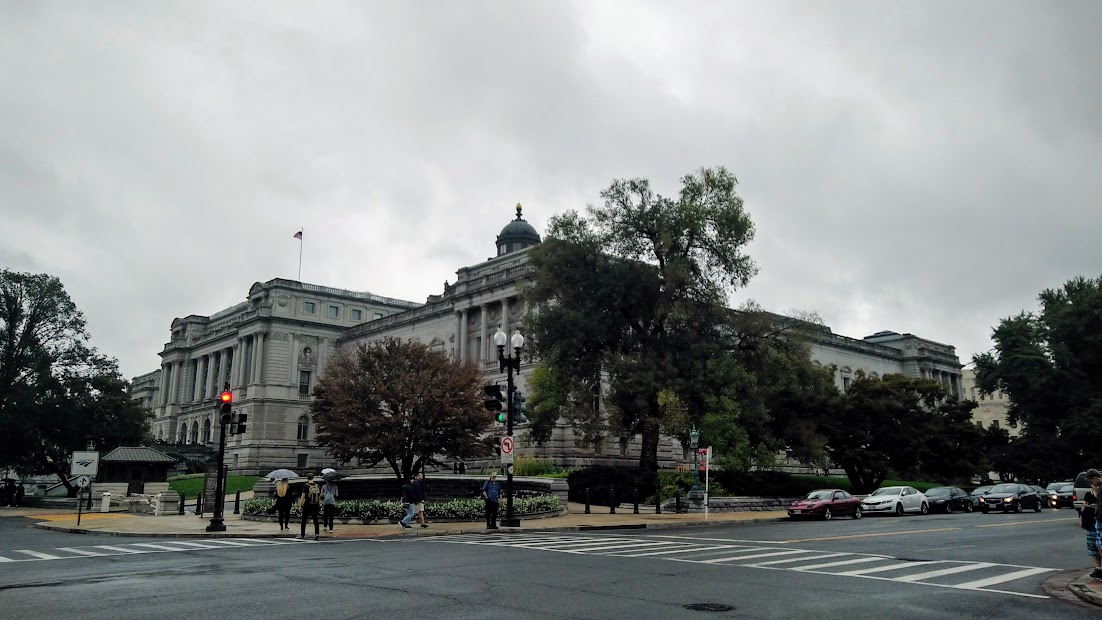 The Library of Congress

The Library houses an extensive collection of research material not limiting by language, subject or format. Most of the original collection was lost during the wars and fire accidents. Thomas Jefferson’s entire personal collection of thousands of books was bought to restore the library. 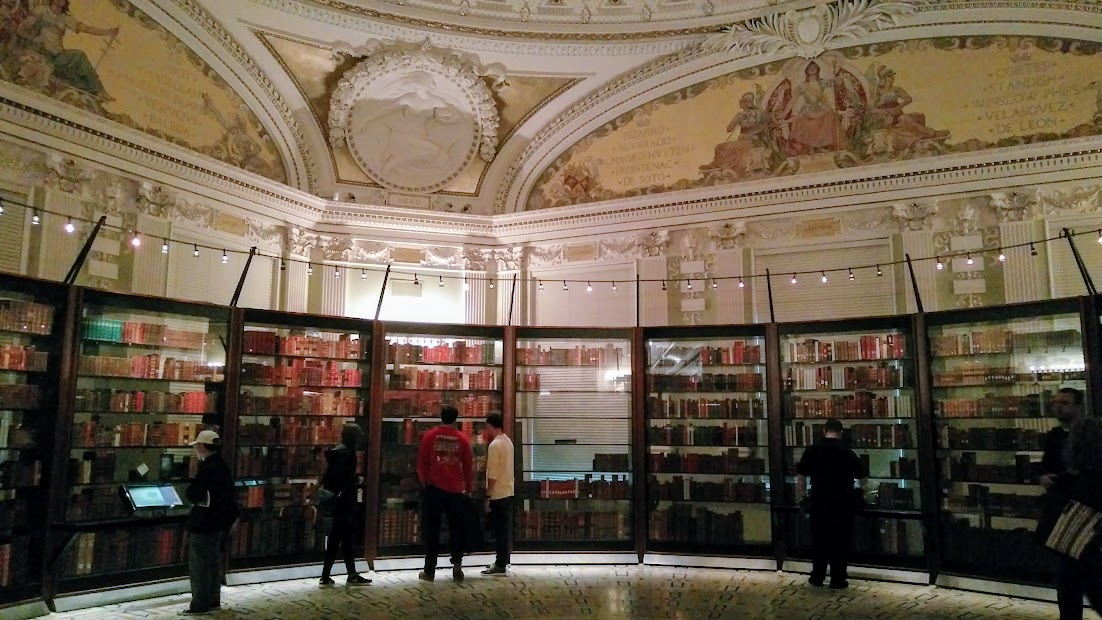 The Library with its elegant decorations, Minerva mosaic, mural paintings, and marble columns is a treat to one’s eyes. The main attractions of the Library are the Great Hall and the Main Reading Room. Although the Library is open for public, entry is restricted to the Main Reading Room, which is only accessible for researchers. The Main Reading Room houses important documents such as the Democracy and Declaration. Visitors can take a peek at the reading room from the second level. 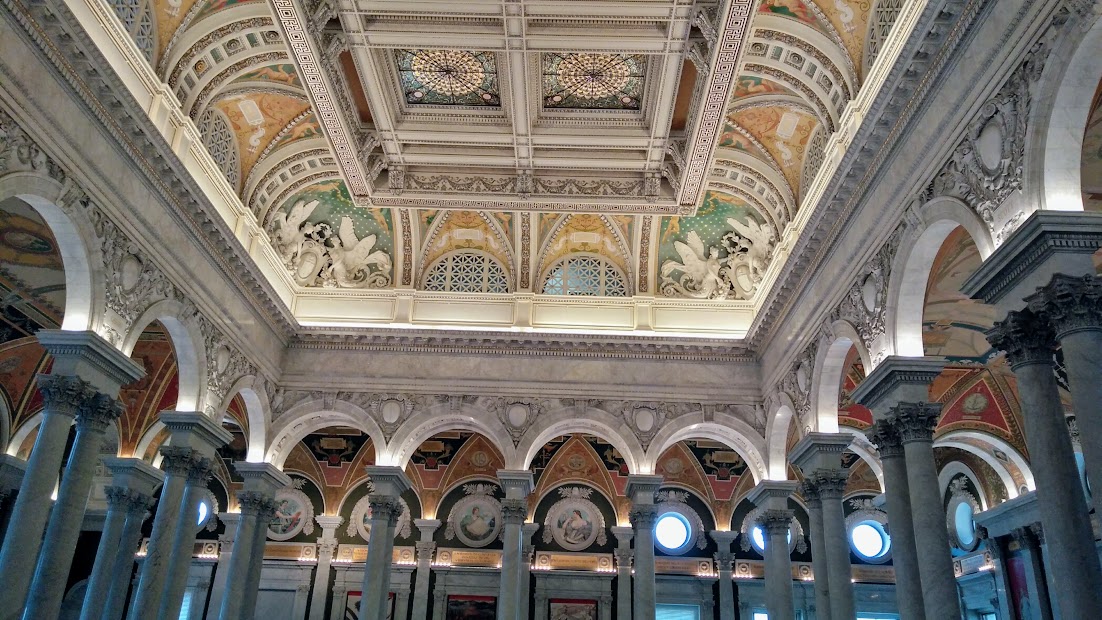 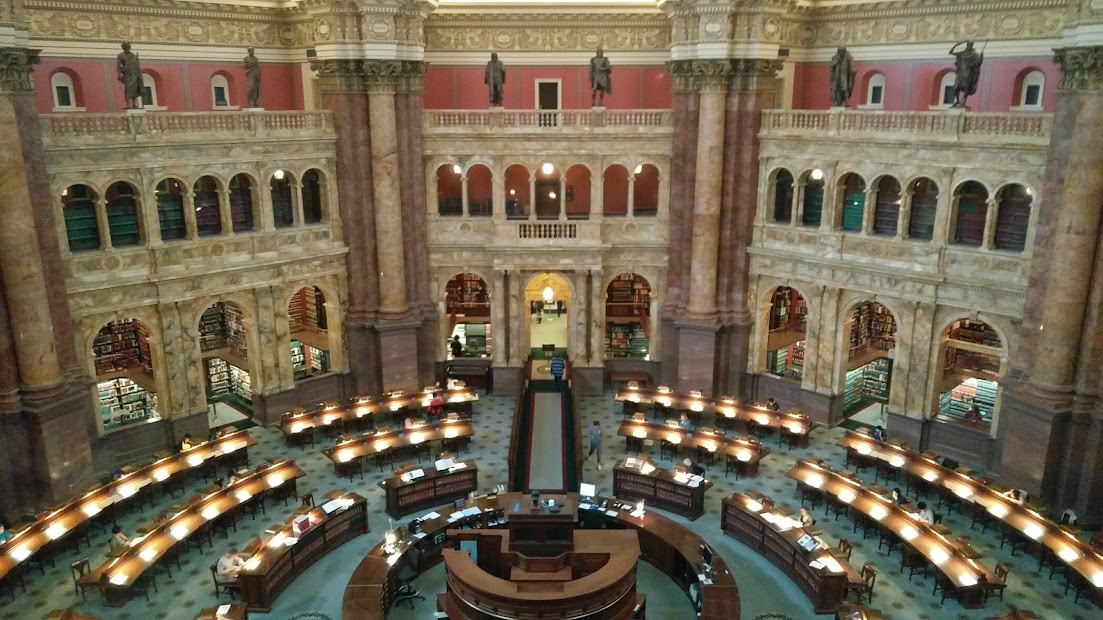 The Capitol is the seat of the legislative of the federal government and one of the iconic national monuments. Visitors may access Capitol either from the street entrance or by a tunnel from the Jefferson Library. The Capitol is open to public 8:30 AM to 4:30 PM Monday through Saturday and closed on few public holidays. It’s advised to look up the visiting hours if you are touring on a public holiday. The Senate and House galleries are open for public with passes whenever the legislative bodies are in session. 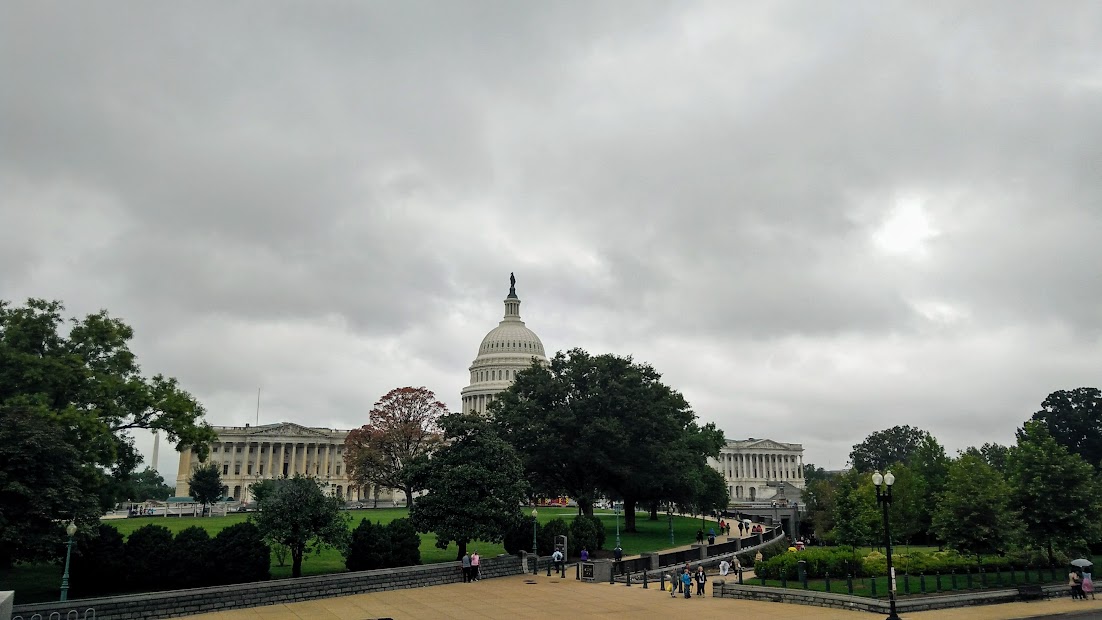 The Capitol Visitor Center is the entryway for all visitors where each one is given a badge, a time slot, and a guide for a group of people. If you take a closer look at the dome of the Capitol, you can see a Statue of Freedom atop the dome. The visiting centre has a plaster cast model of the statue in the entryway. 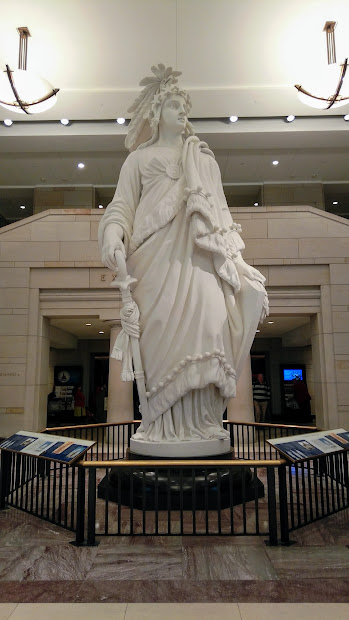 The Statue of Freedom

We first entered the Exhibition hall which features original documents, artefacts, and theatres that provide an in-depth look at the history of the Capitol and the Congress and on how the Congress works. After the short movie, our guide led us to the National Sanctuary Hall Collection. This part of the Capitol comprises of statues donated by individual states to honour notable persons in history. The entire collection at different levels of the Capitol consists of 100 statues, two from every state. 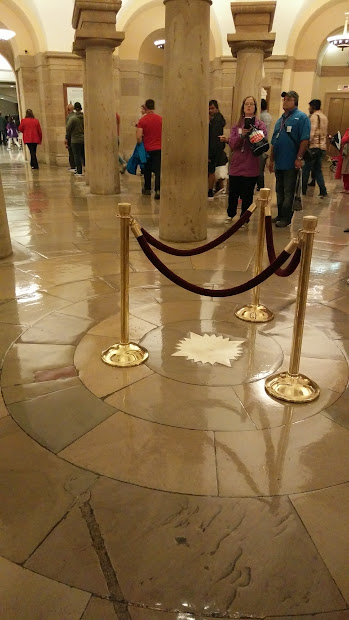 The first floor has a  large circular area called the Crypt. The star in the centre denotes the point from where the streets in Washington are laid out. The Crypt comprises of 13 statues of eminent people from the 13 original colonies. 40 Columns in the Crypt support the magnificent Capitol Rotunda. The Crypt was intended to be the burial place of George Washington. Washington passed away much before the completion of the Capitol and was buried in Mt. Vernon as stipulated in his will. However, the Congress passed a resolution to move his tomb to the Capitol, which was defeated by Washington’s descendants. As of today, no US Presidents are buried in the Capitol. 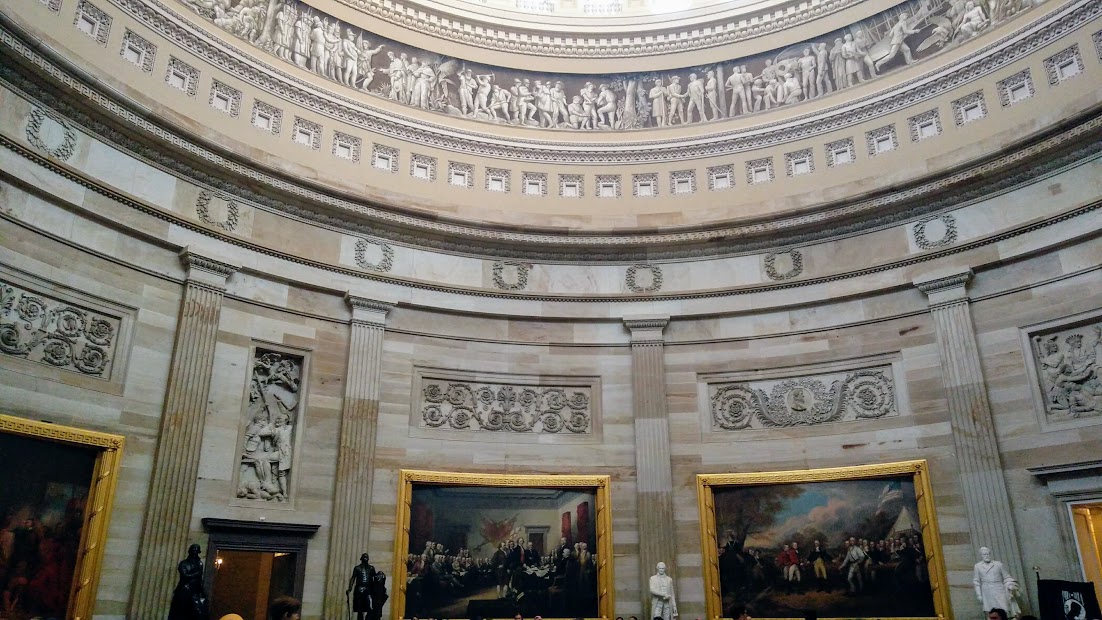 The Rotunda rises 180 feet from the floor and comprises of 6 statues. One of the statues is of the beloved President of the USA – George Washington. The murals and paintings decorating the sandstone walls reflect significant events such as the discovery of America, the founding of the US, many wars fought, and other great moments and people indigenous to the country.  The Capitol also has a gift shop on the upper level and a cafeteria on the lower level. After exploring the interiors of the Capitol, we walked out to capture the exteriors of the iconic monument. 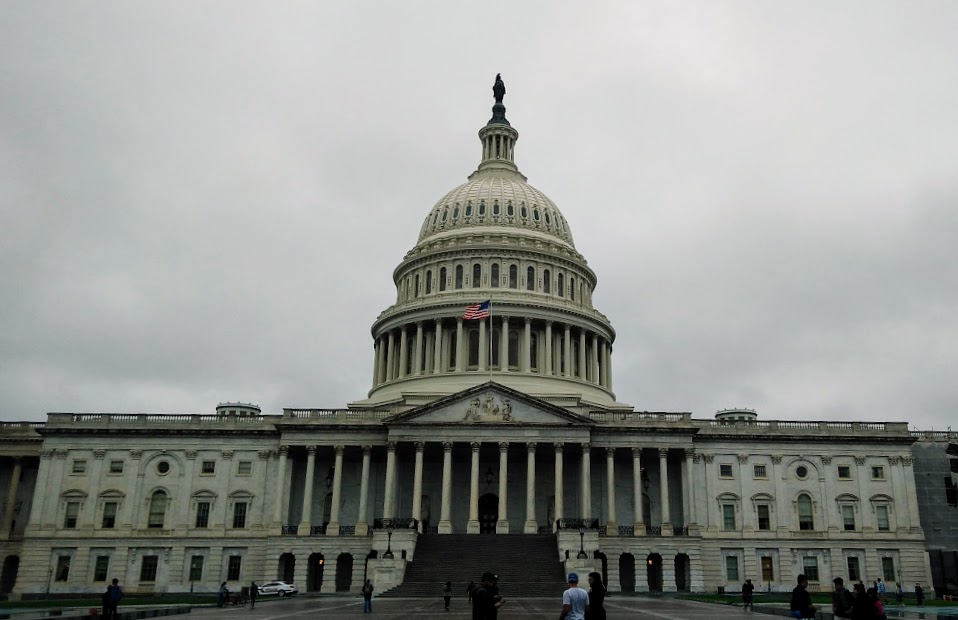 Next up, we walked towards the Washington Monument, at a distance of approximately 1.5 miles from the Capitol and Lincoln Memorial, located to the west of Washington Monument at a distance of roughly 1 mile. The entire stretch is termed as National Mall, which also contains numerous Smithsonian Museums, Art Galleries, Memorials, and Cultural Institutions. As always, I ponder upon names, why the term “mall” I wonder, and a little research taught me that the place or a rectangular grass lawn where people play pall-mall, a game similar to croquet is called a mall. The term National Mall – a green space spanning from the Capitol to Lincoln Memorial in the nation’s capital now makes perfect sense. 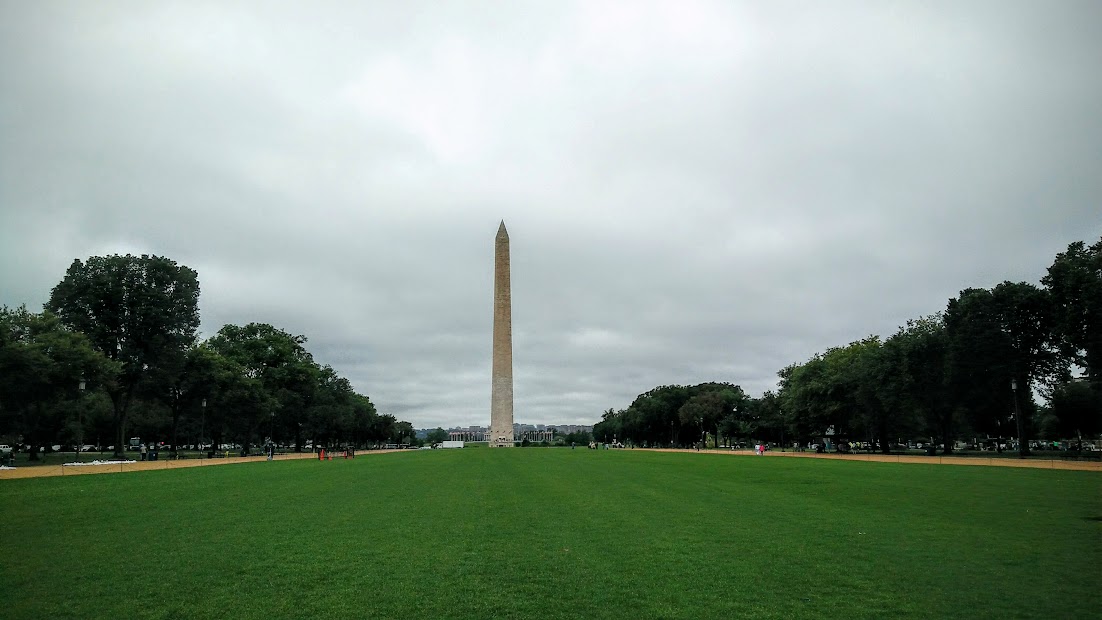 Washington Memorial is the world’s tallest stone structure built to commemorate George Washington. Fifty American Flags are flown in a large circle around the monument. The monument’s towering height combined with open expanse makes it visible almost from all parts of DC. It has an elevator which takes visitors to an observation deck at the top and is currently closed for maintenance until Spring 2019. 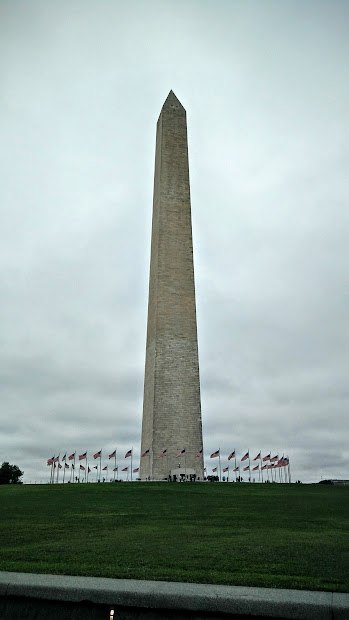 Washington Monument and the 50 American Flags

Before calling it a day we made quick stops at The White House – the official residence of the President of the US, and the Lincoln Memorial. 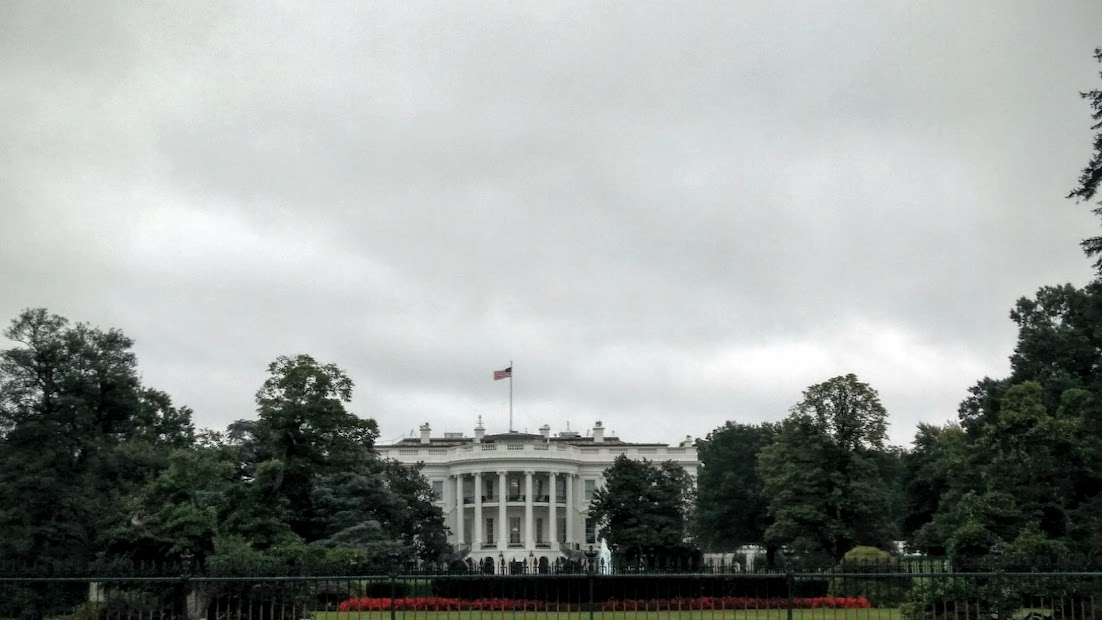 Lincoln Memorial is a national monument built to honour President Abraham Lincoln. Located at the western end of the National Mall, the white marble structure with 36 columns, to mark one for each state at the time of Lincoln’s death, faces the reflecting pool. It contains a seated sculpture of Abe Lincoln, and the interior walls have an inscription of two of his famous speeches. 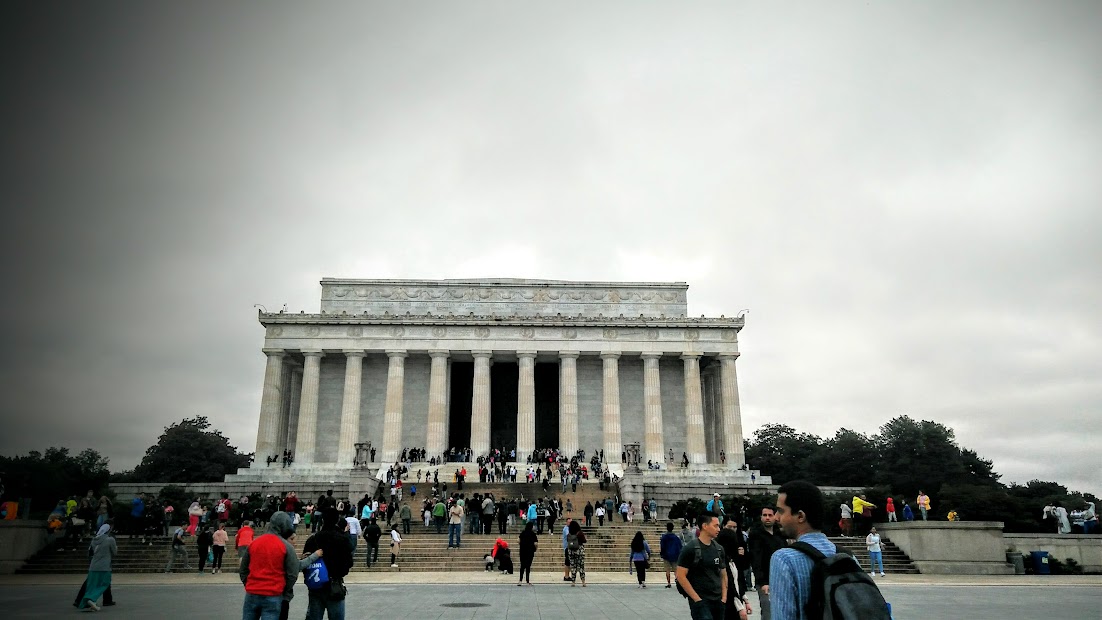 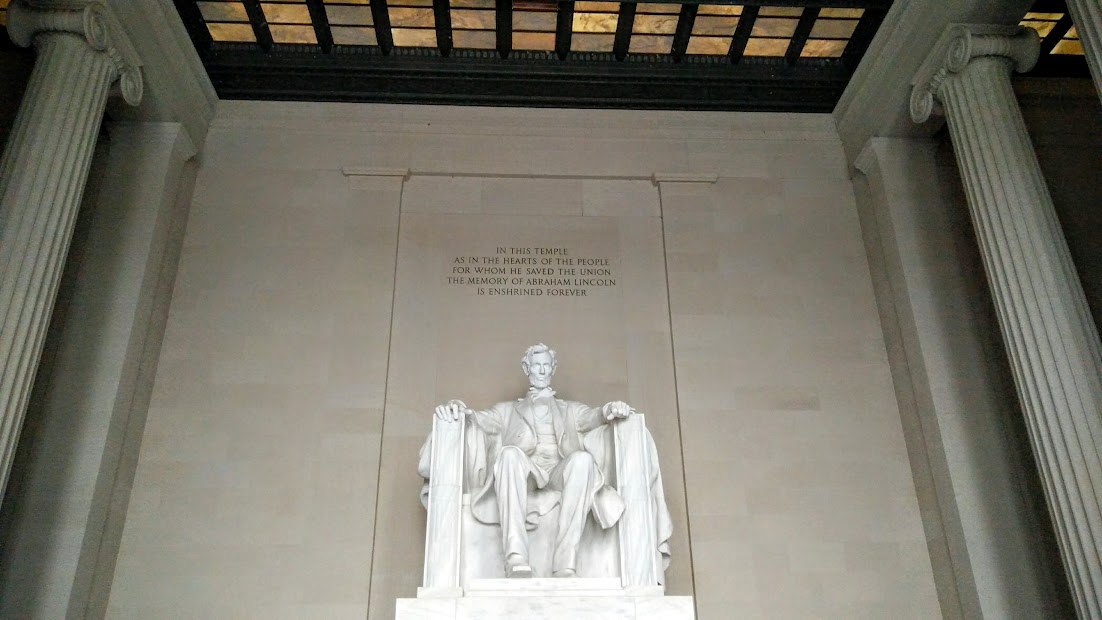 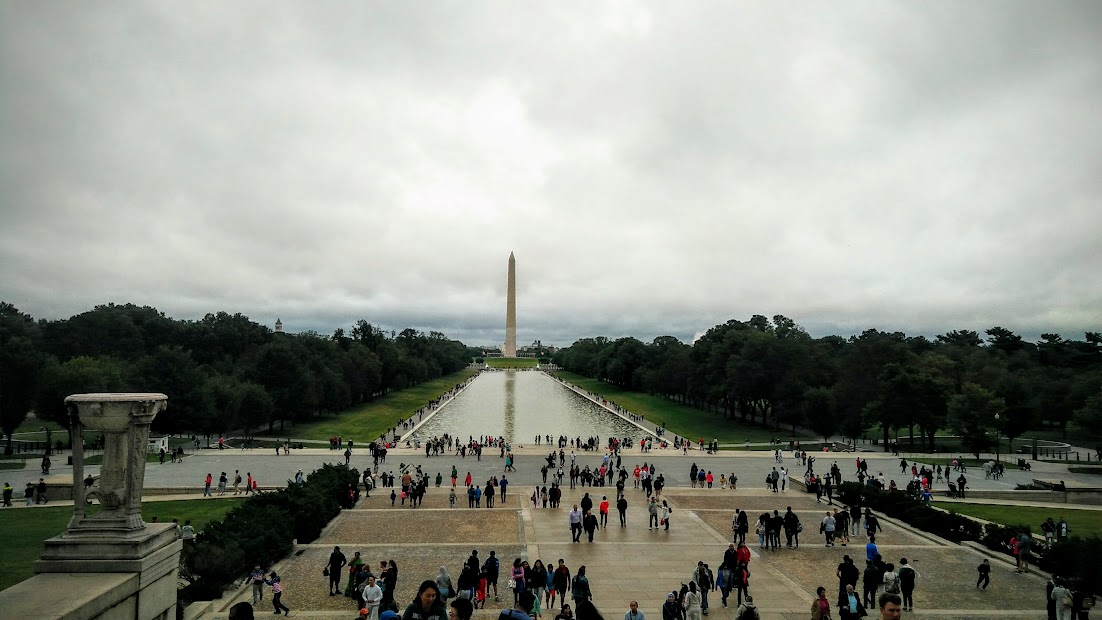 We started our Day 2 by visiting Georgetown Waterfront Park that stretches along Potomac River. The waterfront has restaurants, condominiums, and offices with beautiful flowering trees and fountain plaza, separate biking and walking trails, and yacht cruises. Potomac River separates Virgina from Washington, DC. 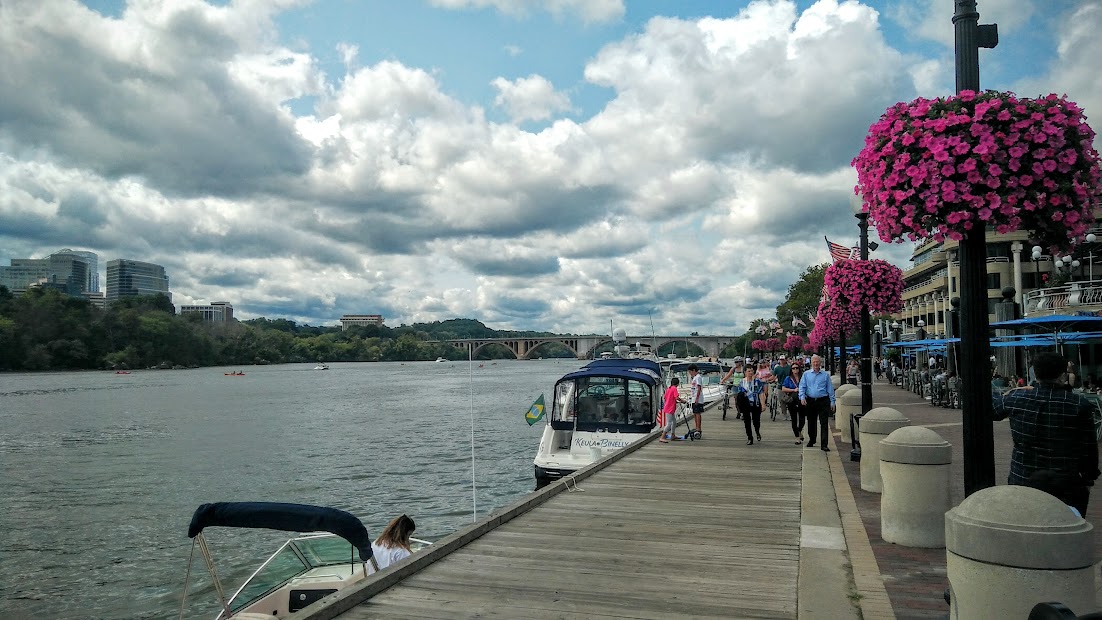 When it comes to food, I always like to taste something native to the place I am visiting. Thanks to my friend’s suggestion, we paid a visit to Georgetown Cupcakes, a cupcakery in the neighbourhood of DC. When we got there, there was a queue quarter of a block long. We waited a full hour to order our Red Velvet, Peanut Butter Fudge, and Chocolate Coconut cupcakery and felt it was worth the wait. I recently learnt they have outlets in NYC and I would love to try the next time I’m in the City.

Another thing I discovered during this trip was about Smithsonian Institution. It’s the world’s largest museum and research complex working towards preserving the heritage, sharing the knowledge and resources through museums and zoos. The National Mall has ten different museums dedicated to art and craft, history, aviation, postal services, culture, etc. The best part is, the entry is free and two days is inadequate to explore them all. DC needs another visit just for the museums.

We chose to visit the National Museum of Natural History, which is open through out the year and is the world’s most visited natural history museum! The museum’s collection contains specimens of fossils, minerals, dinosaur, animal, and human remains, human cultural artefacts, tools used by early man, Egyptian mummies, to name a few. My personal favourite was the Hall of Mammals and the Hall of Geology, Gems, and Minerals. The eye catcher in the Gems section was the famous Hope Diamond whose origin traces back to India. The museum closes at 4:30 PM, and we were there till we were asked to leave. 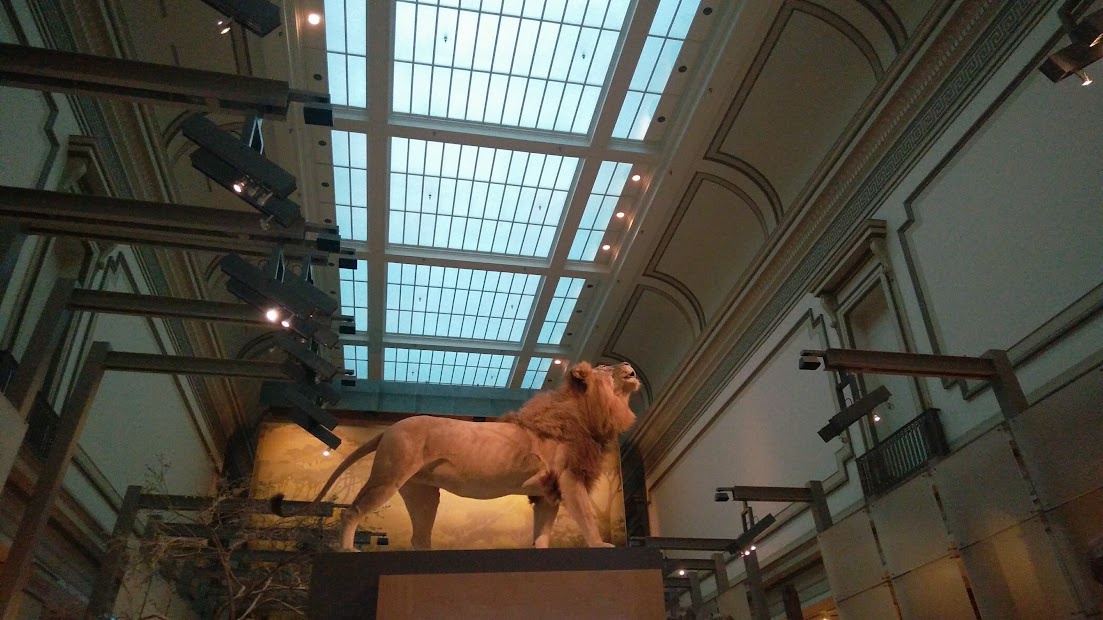 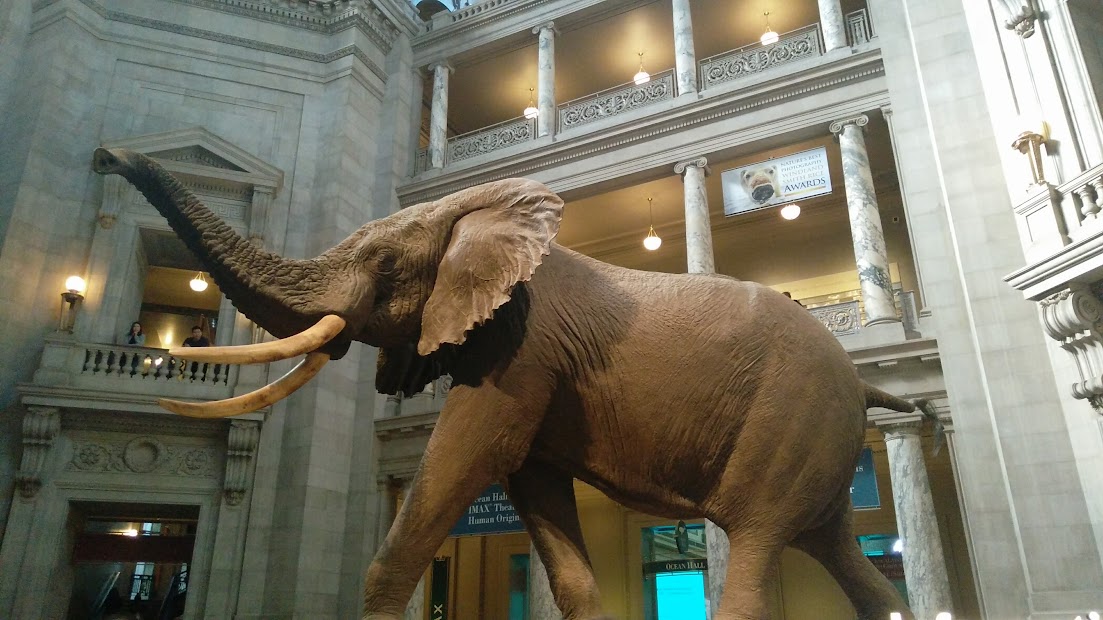 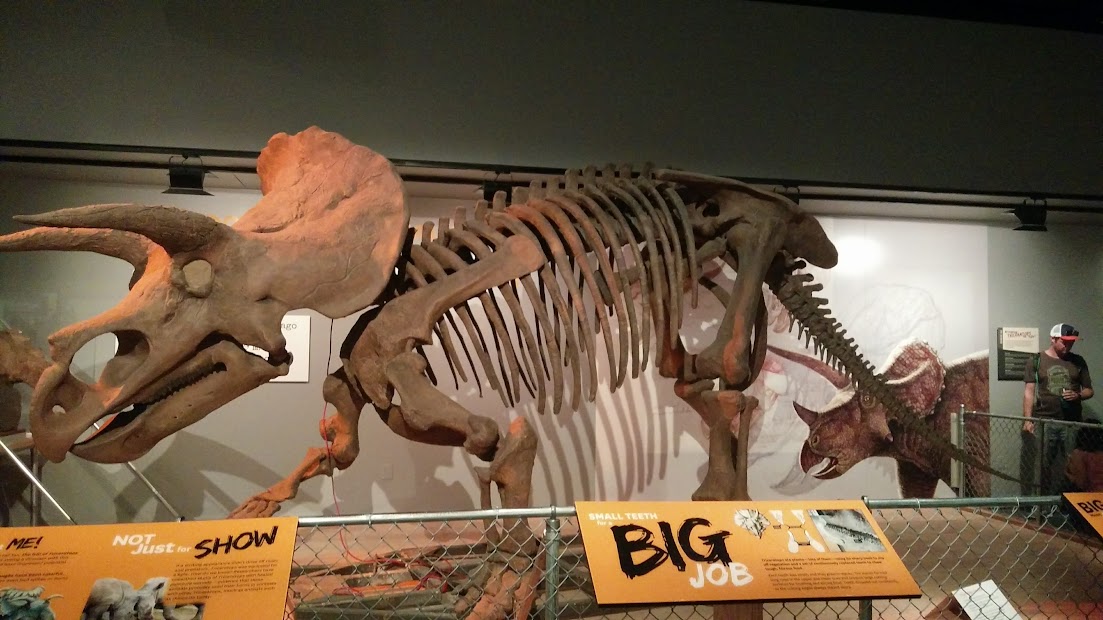 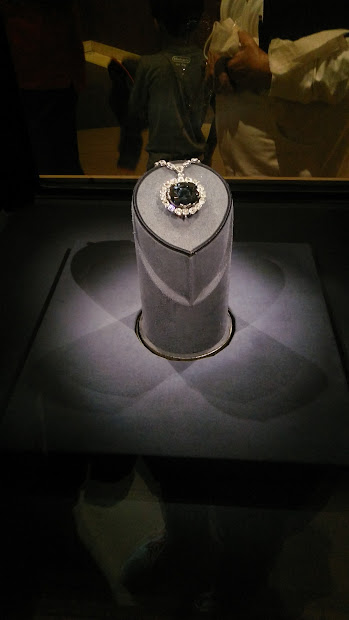 The last leg of my trip was a visit to Potomac River Tidal Basin. The human-made reservoir is famous for its Cherry Blossom Festival held in Spring. As I was visiting in Summer, I wasn’t lucky enough to see the cherry blossoms. Nonetheless, it was still charming. 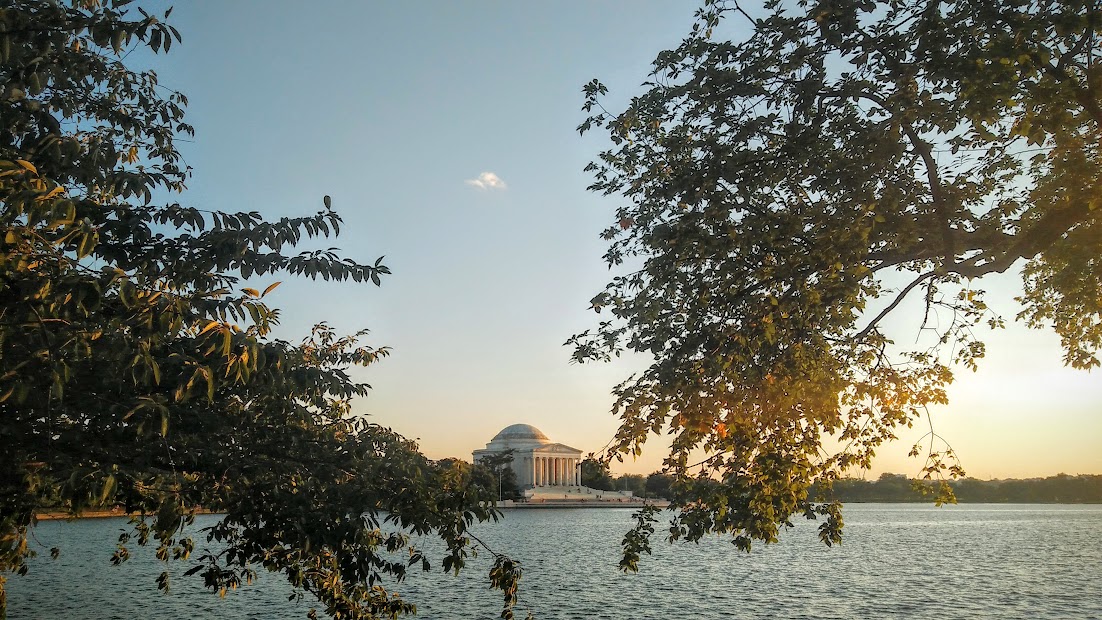 A couple of memorials are situated adjacent to the Tidal Basin, and we chose to visit Jefferson Memorial. Jefferson Memorial is another Presidential Memorial dedicated to Thomas Jefferson, one of the founding fathers of the US. The memorial houses a bronze statue of Jefferson in standing position, facing the White House. 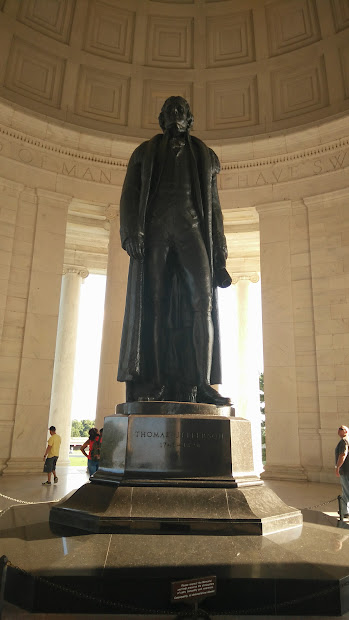 The interior walls have the inscription of the Declaration of Independence which was originally drafted by Jefferson. We were eavesdropping to a guide describing the monument’s history to his tourists and learnt that Franklin Roosevelt who admired Jefferson wanted a statue of his favourite President erected opposite to the White House such that he could see it first thing in the morning! He also ordered trees to be cut for an unobstructed view of the monument from the White House, which led to significant opposition.

View of Tidal Basin from the steps and the Washington Moment afar was breathtakingly beautiful. We sat there waiting for the sun to go down, enjoying the cool breeze, rehashing old memories of college days. 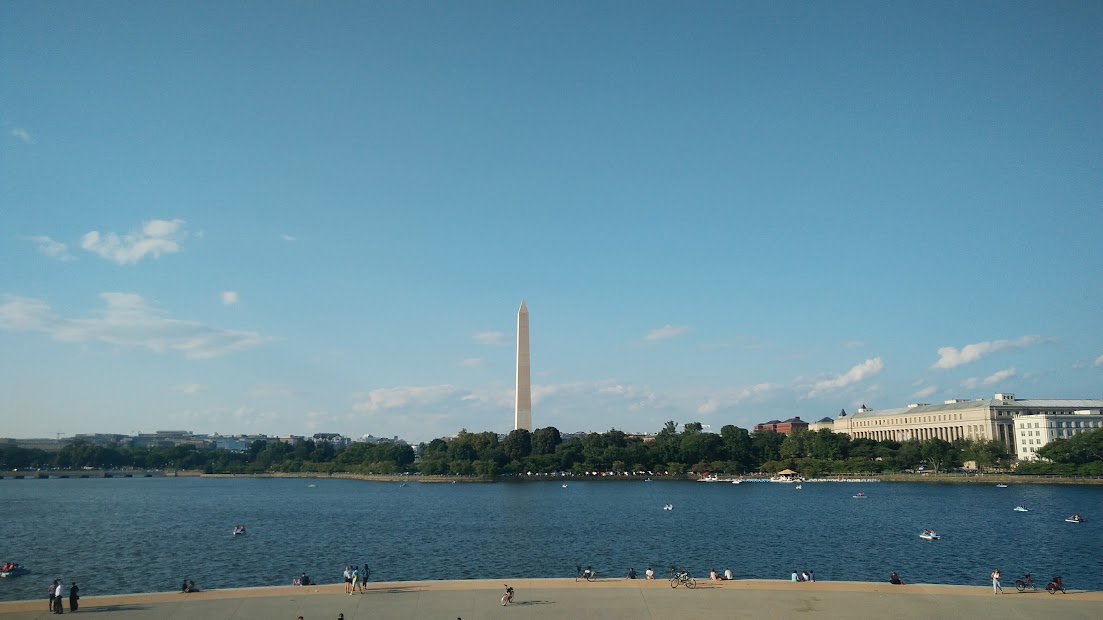 On our way back to the Metro Station, we saw many major Federal Buildings such as Beaurau of Engraving and Printing, where the US paper currency is printed; Department of Agriculture and its different blocks interconnected by beautiful arch ways. 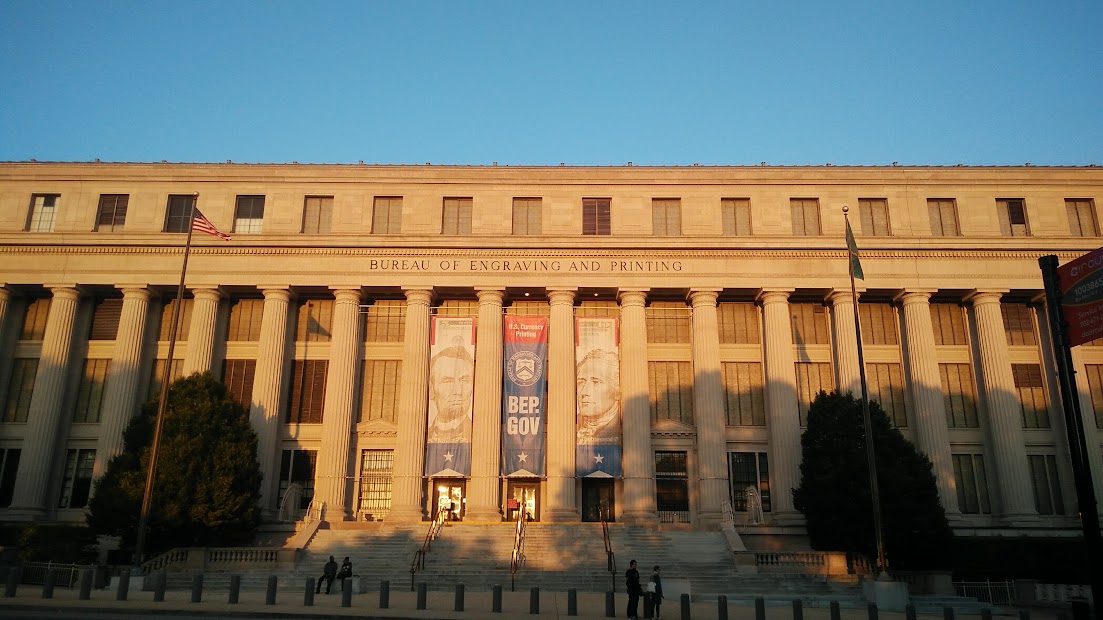 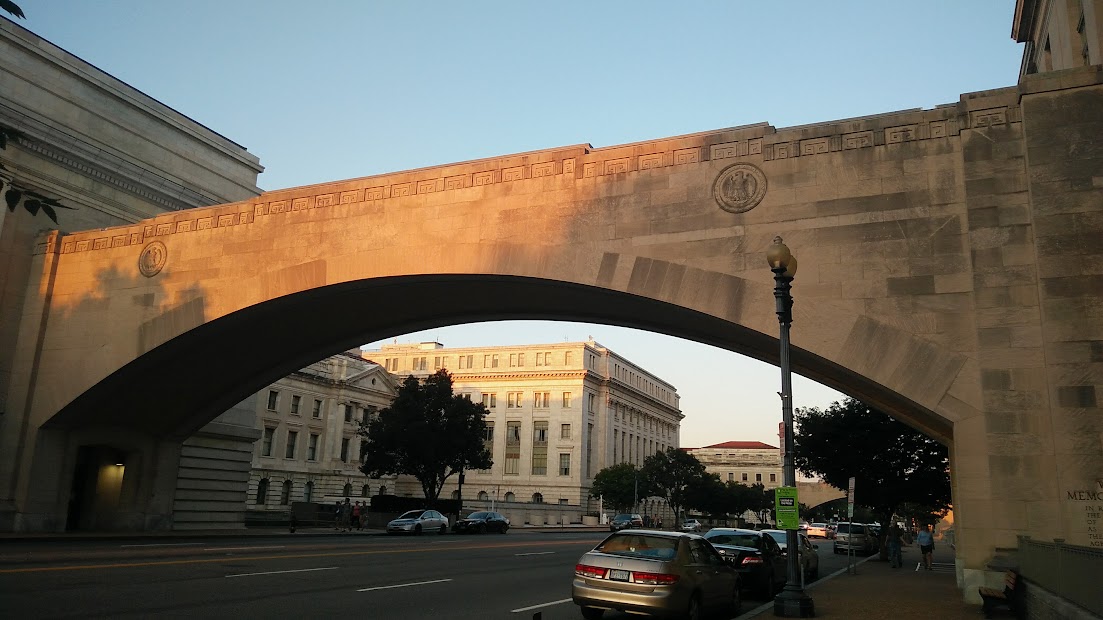 The iconic city of DC with its vistas and immense history alongside meeting my dearest buddy and her family was a delightful experience. I shall revisit Washington, DC in future to explore and enrich myself.