From the time I set foot in the country, I wanted to visit Boston – one of the oldest cities of the U.S. for all the great things I had heard about it. V and I decided to go on a road trip to Boston for my birthday weekend, which also happened to be our first holiday together.

It’s only natural to make the most of the new city you are visiting by exploring the city’s famous attraction, sightseeing, and sampling local cuisines. But this time around I wanted V to play my guide and take me to places he frequented and also visit sites that he had not explored before.

We arrived in the city a little past noon and without wasting any time we headed out to Cambridge to visit Massachusetts Institute of Technology. Assimilating its vastness, history, contribution to the world, we were ready to wander out to our next stop. While we were walking out of the campus, we saw many grads in their gown and cap clicking pictures with their alma mater in the background. The feeling of accomplishment in them was evident. Boston is known for its educational institutes, and I was glad I could visit one of them. 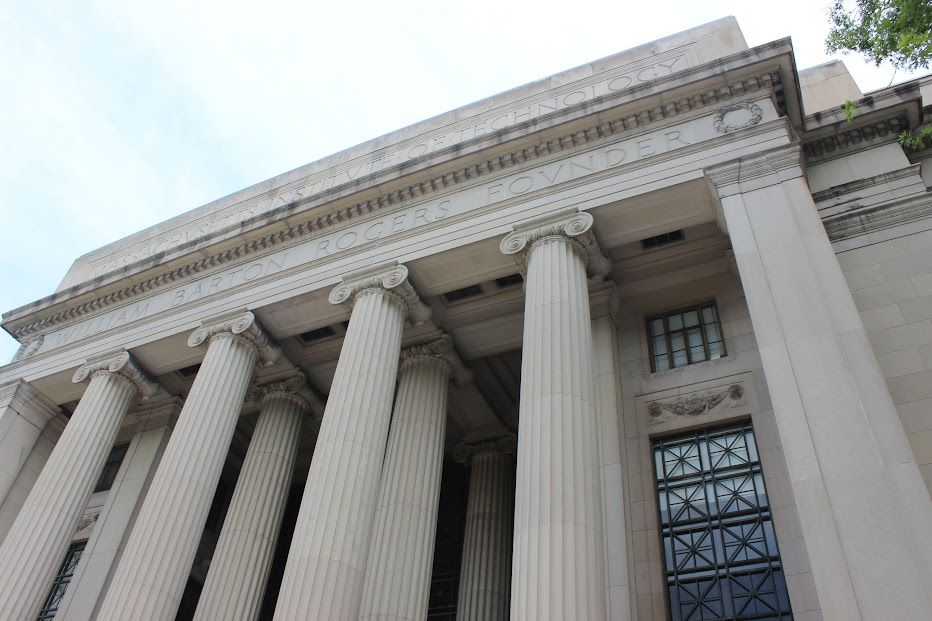 River Charles flows right opposite to MIT; we walked by the river all the way to Cambridge Parkway. The Esplanade looked like a haven of luxury living with spectacular views of the river and the city skylines. The street was buzzing with musicians, caricature artists, food trucks, and street performers. 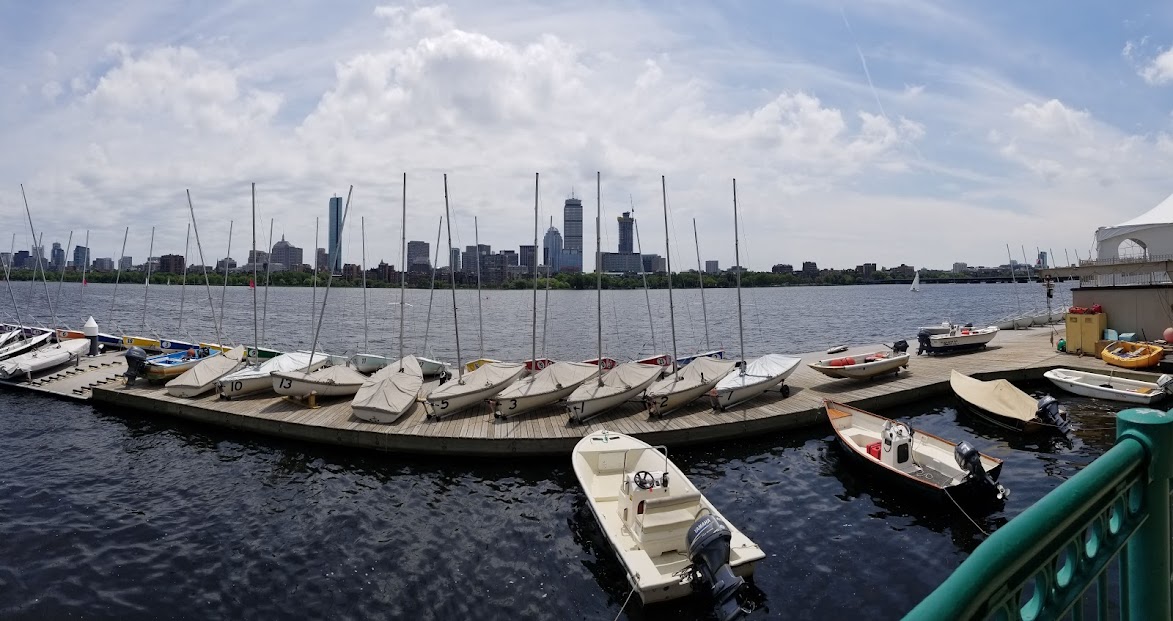 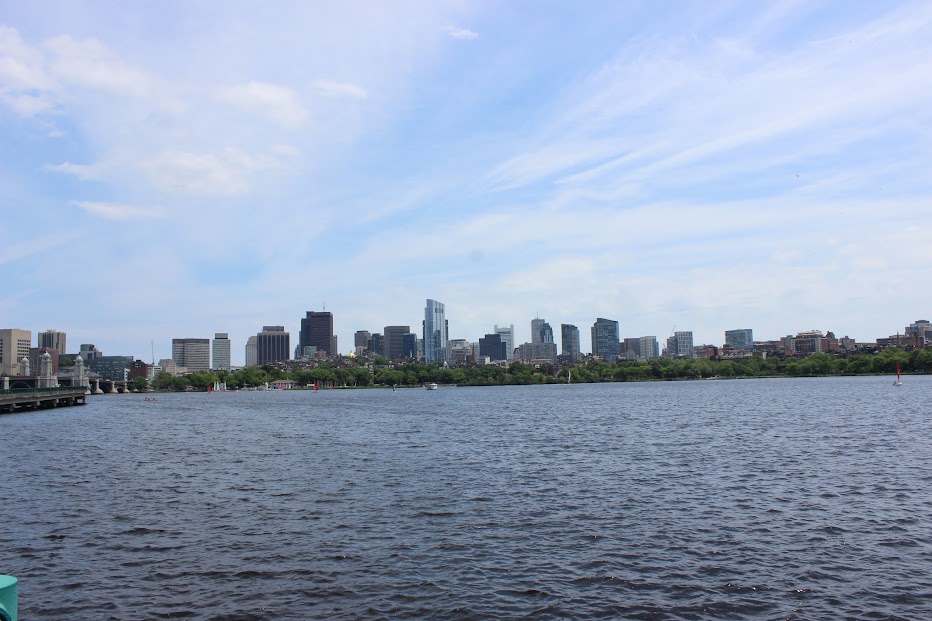 Next up we walked to Public Garden and Boston Common, two lush gardens with duck pond, frog pond, a retreat from the hustle-bustle of the city. Ideal for dog walkers and joggers or for those who want to relax and people watch. 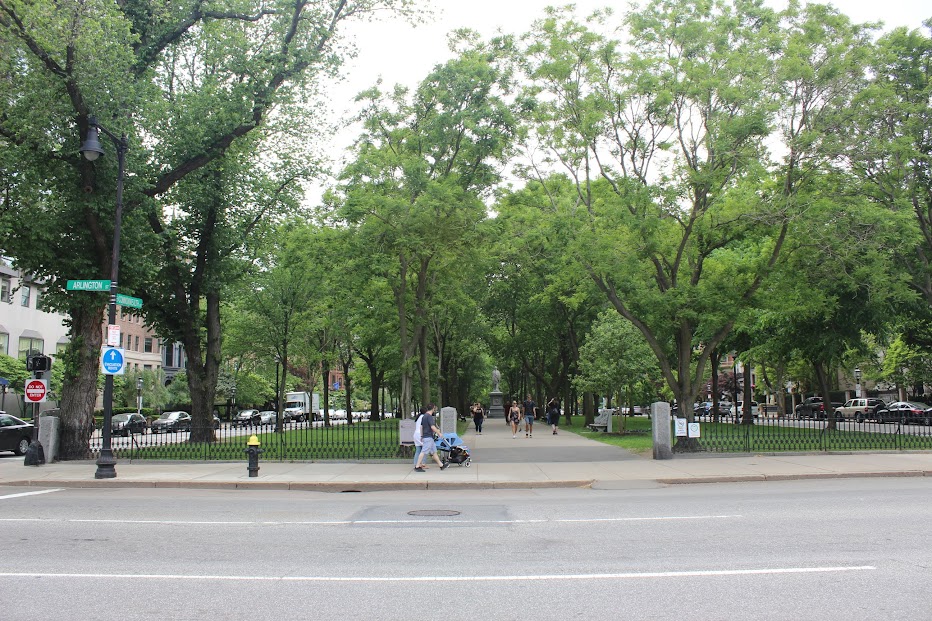 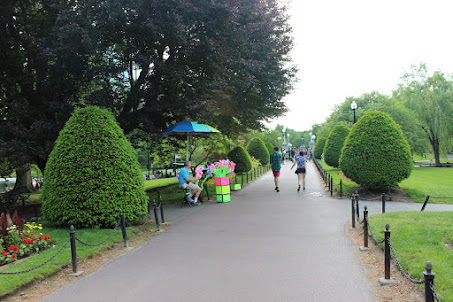 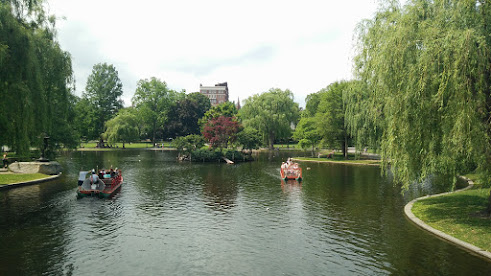 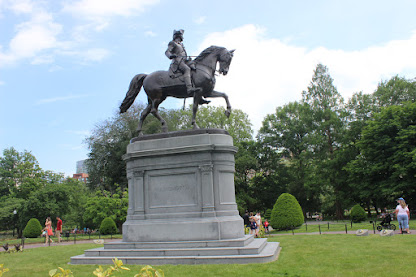 On our way, with duck tours and trolleys running past us, we made multiple stops at State House, monuments, and war memorials, walking past the Public Garden onto Commonwealth Avenue Mall, which reminded me of the National Mall in DC. Designed in French Boulevard, Commonwealth Avenue in Black Bay neighbourhood has memorials and plaques of Congressmen, Mayors, historians, soldiers, and countrymen who contributed during the Revolutionary and Great Wars, of those who helped build the city. 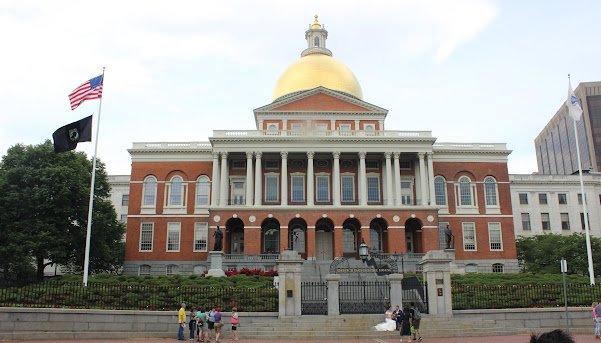 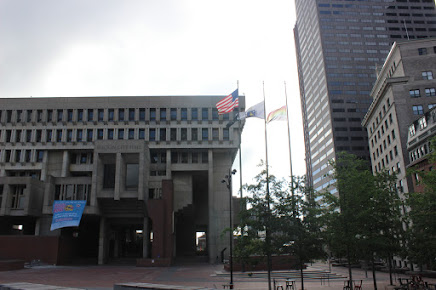 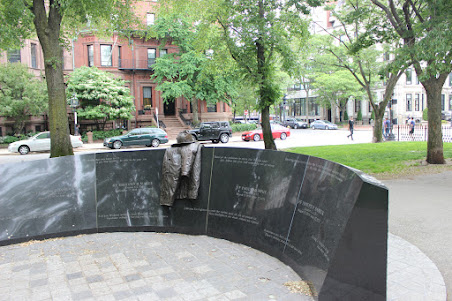 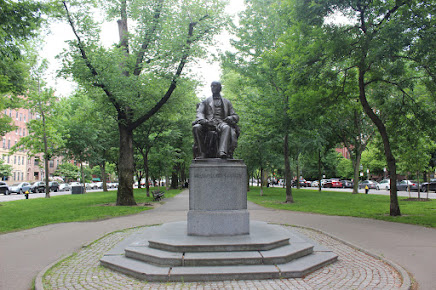 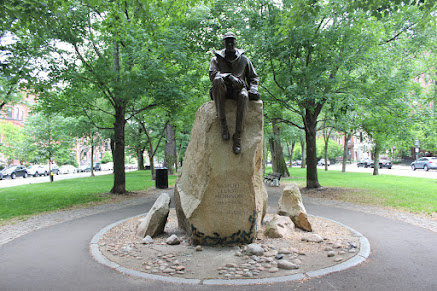 The British influence is quite evident in the city’s architecture, public transport, and the names of streets, avenues and towns. That’s perhaps why I was drawn to this city 😉 Anything British easily excites me. Like all state and most cities of the US, Boston several nicknames too like ‘The Hub’, ‘City on a Hill’, ‘The Olde Towne’, etc. Of which, one peculiar nickname ‘Beantown’ caught my attention. On some research, I learnt that back in colonial days baked beans was a regional dish of Boston. Early Puritans who strictly observed Sabbath ate baked beans as part of their meal. In the 18th century when Boston became an exporter of rum, molasses was added to locally baked bean recipes, creating Boston Baked Beans. Traders called it Beantown, and that’s the history of the acquired nickname. A famous anecdote recounts how my home city Bengaluru got its name from a grateful Hoysala King who named it ‘Benda-kaal-ooru’, literally ‘town of boiled beans’, which eventually colloquialised to Bengaluru. I was fascinated to learn that there was another ‘Bendakaalooru’ on the other side of the globe 😀

I admire cities with good local transportation and Boston is undoubtedly one of those. Massachusetts Bay Transportation Authority or popularly just called as “T” includes subways, commuter rails, ferries, and buses. We took the Green line from Prudential to Boylston Street and walked to Chinatown in the evening.

Chinatown is the cultural hub of the Chinese community and is known for Asian eateries, food markets, bakeries, and gift shops. The neighbourhood was adorned with Chinese architectural arches, contemporary parks with fountains, plants native to Asia, and pavements painted like a Chinese chessboard. 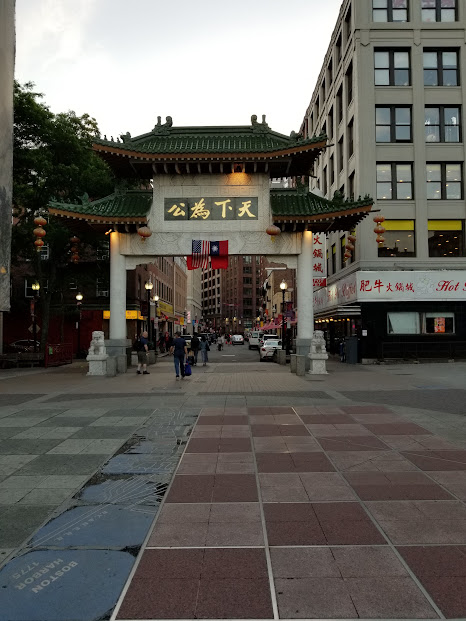 We were meandering late into the evening, and it was only through pure serendipity that we bought tickets to an off-broadway show in Boston Theatre District, a short walk from Chinatown. The downtown’s Theatre District was bustling with energy with a cluster of theatres, Opera house, pubs, and bistros. We went to Charles Playhouse, Boston’s premier theatre where Blue Man Group was performing. It was our first off-broadway show together which we thoroughly enjoyed. Blue Man Group was a delightful experience bursting with laughter, music, and surprises, with no single dull moment. 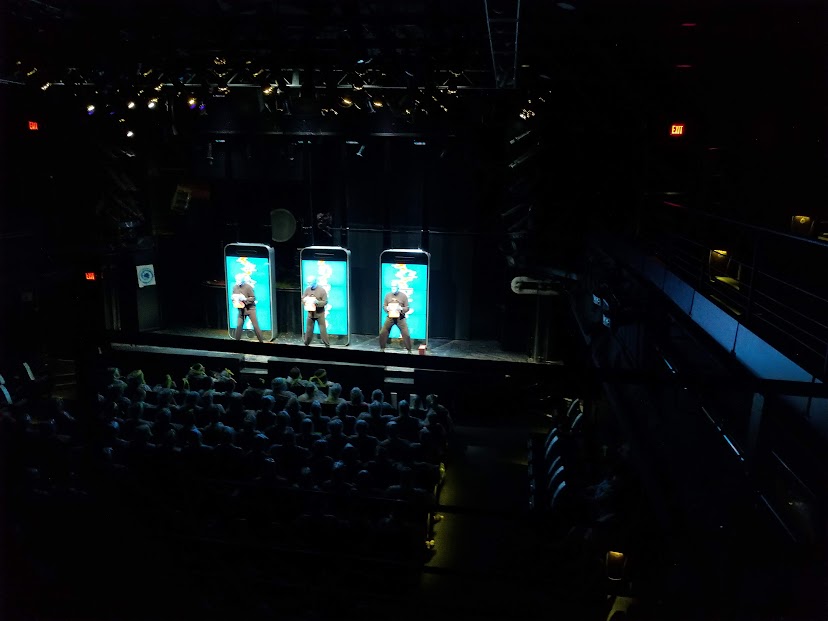 Day 2 – We started early to get ourselves to Long Wharf Marine Terminal where we were scheduled to ride the Boston Harbor Cruise to see the whales. Cruising through high tides, enjoying the city’s skyline view from the water, city’s historic sites, Harbour Islands, tall ships, lighthouses, aeroplanes flying in and out of the nearby airport was an absolute delight. If there are no whale sightings, BHC gives you a full refund or a free ticket for a future whale watch. Either way, it is a win-win. 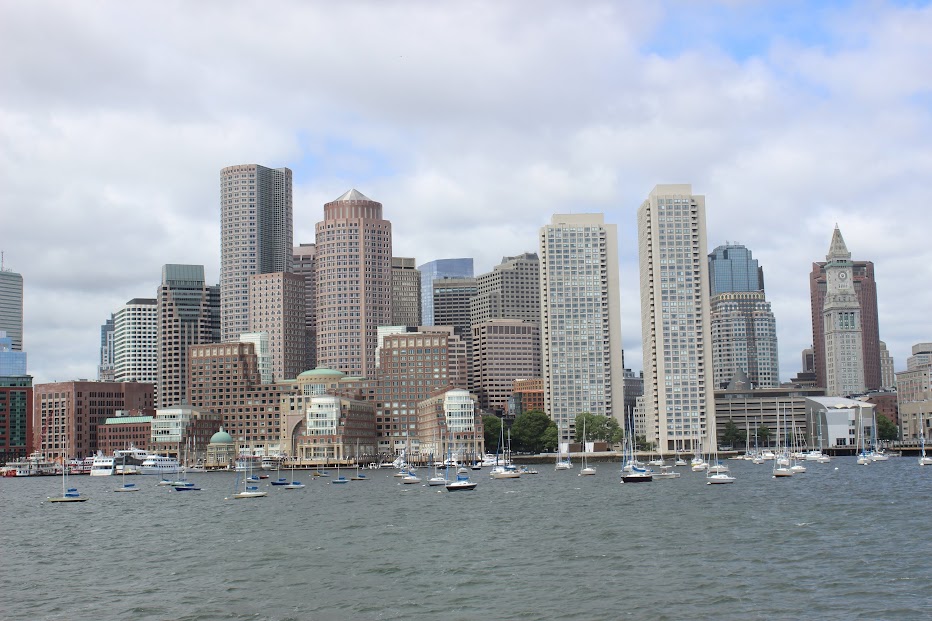 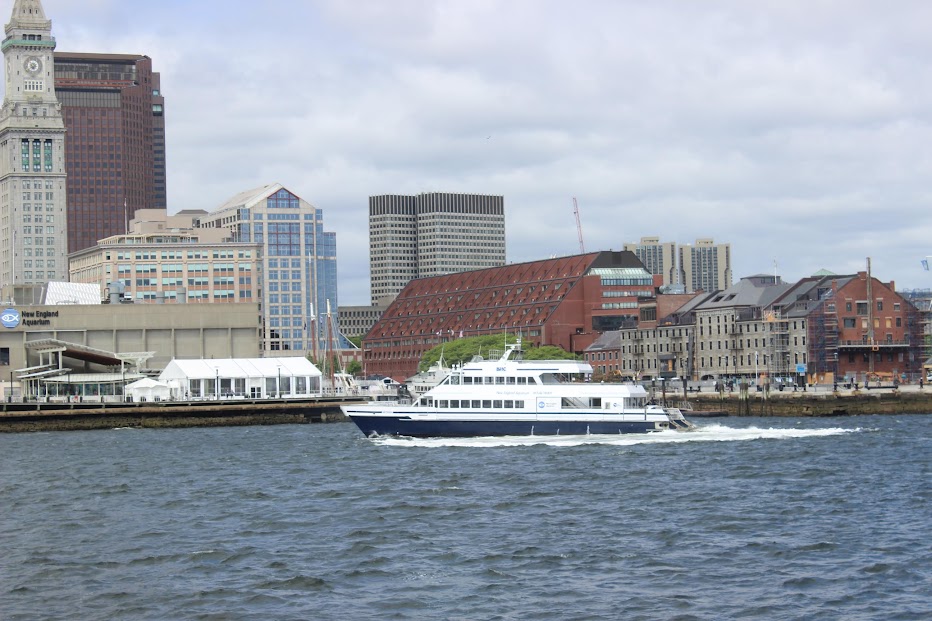 After our boat docked back at Long Wharf, we walked to Quincy Market – a historic market complex comprising three markets – Quincy, North, and South markets with hundreds of shops and restaurants of varied cuisines. The facades exhibit a strong Roman architecture. Open spaces of the marketplace is a common venue for street performers and vendors. 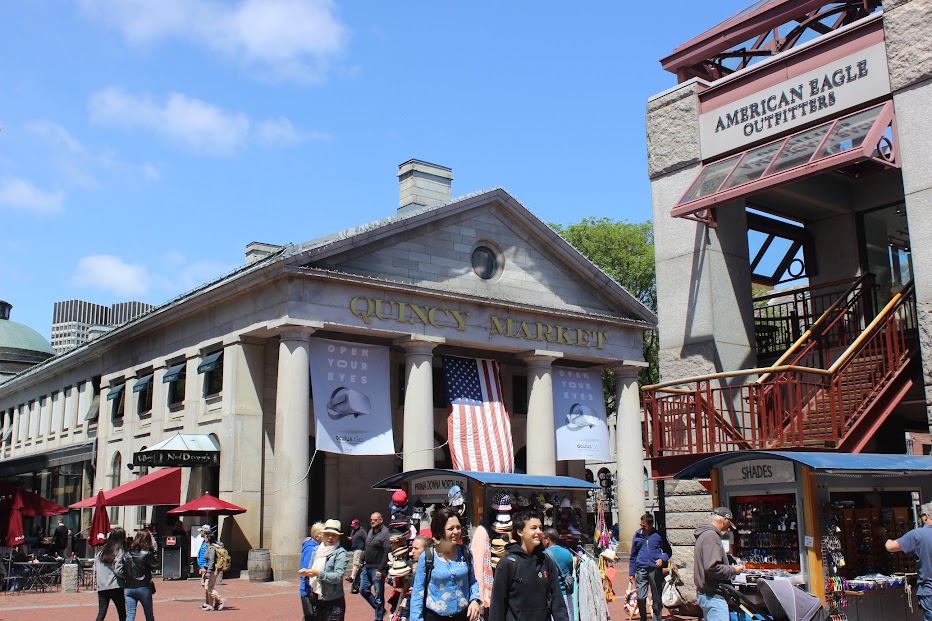 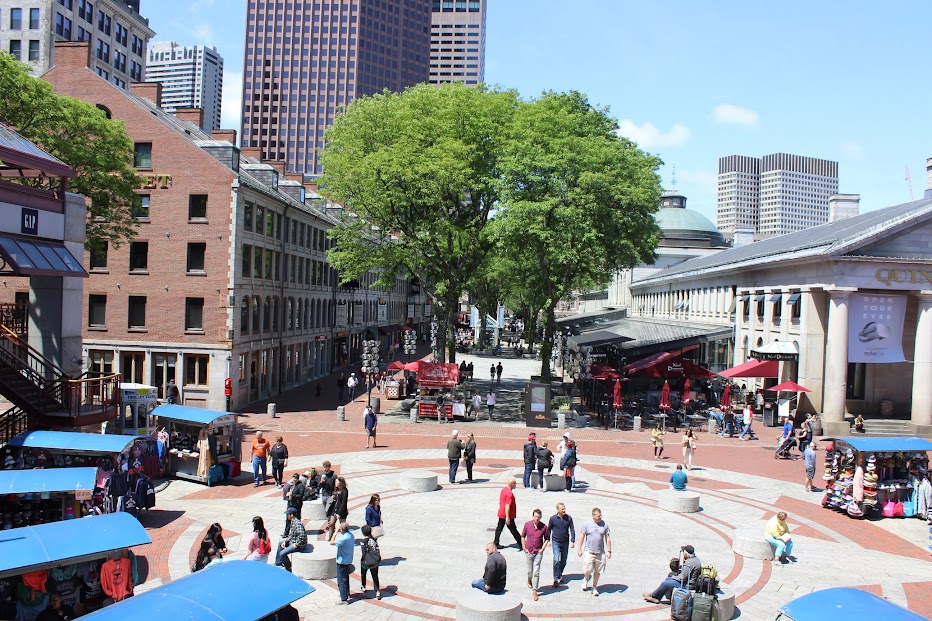 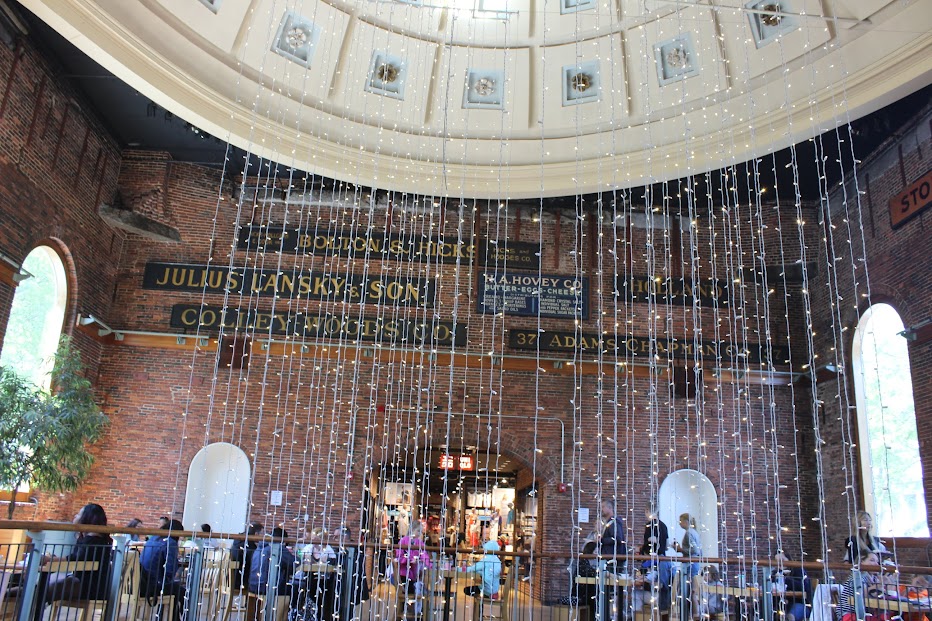 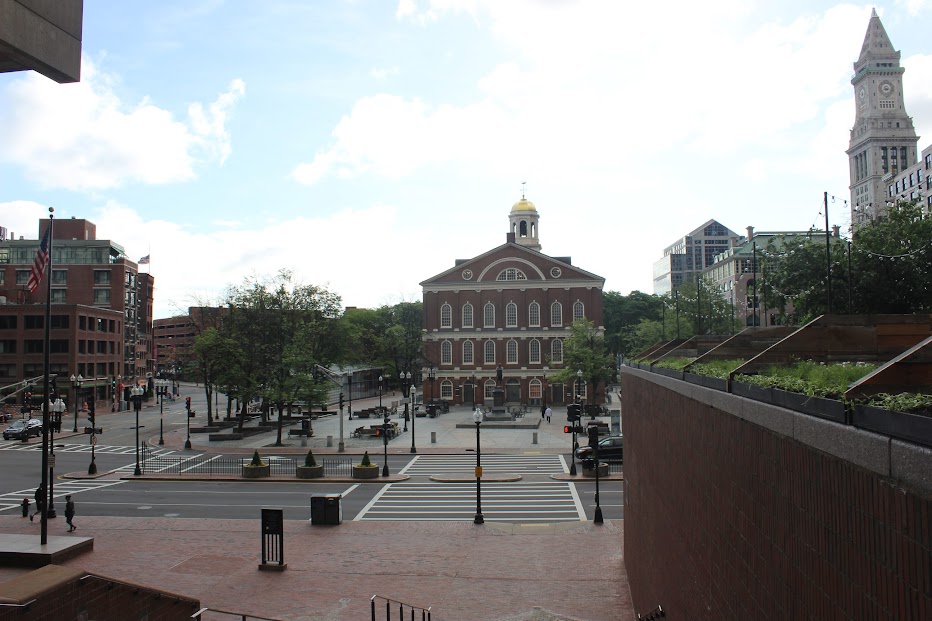 Next up we went to Boston’s Dreamland Wax Museum. Originally from Brazil, Dreamland Wax Museum chose Boston as the place to open their first US Wax Museum in 2017. I have visited many wax museums in London and Singapore, but this museum was different because it is relatively new, we could talk to the artist who gave us a detailed insight on how the figures are sculpted. The museum had figures of world leaders, celebrities, sports icons, and an entire hall for Presidents of the USA. Each wax figure displayed was a unique work of art. 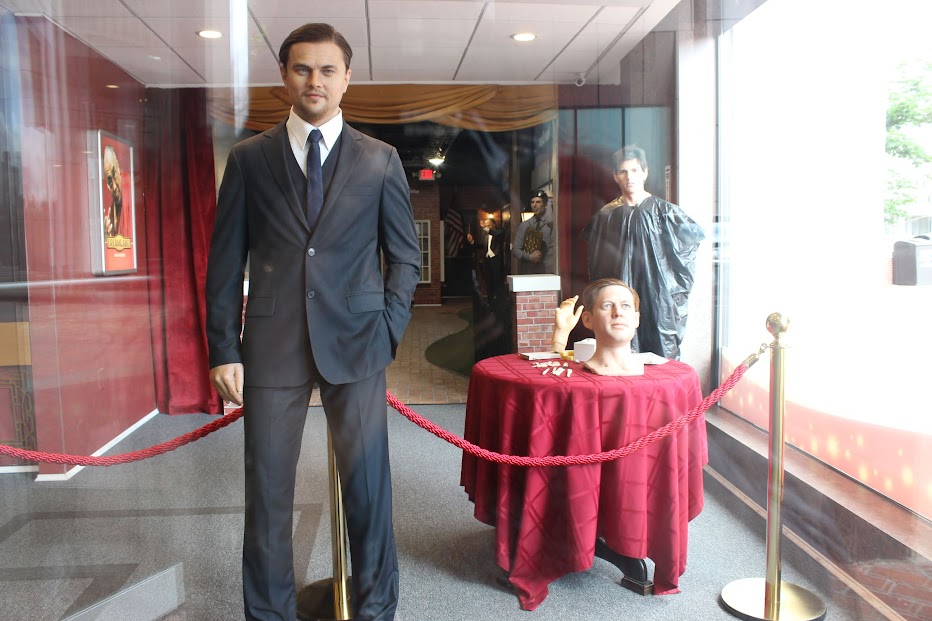 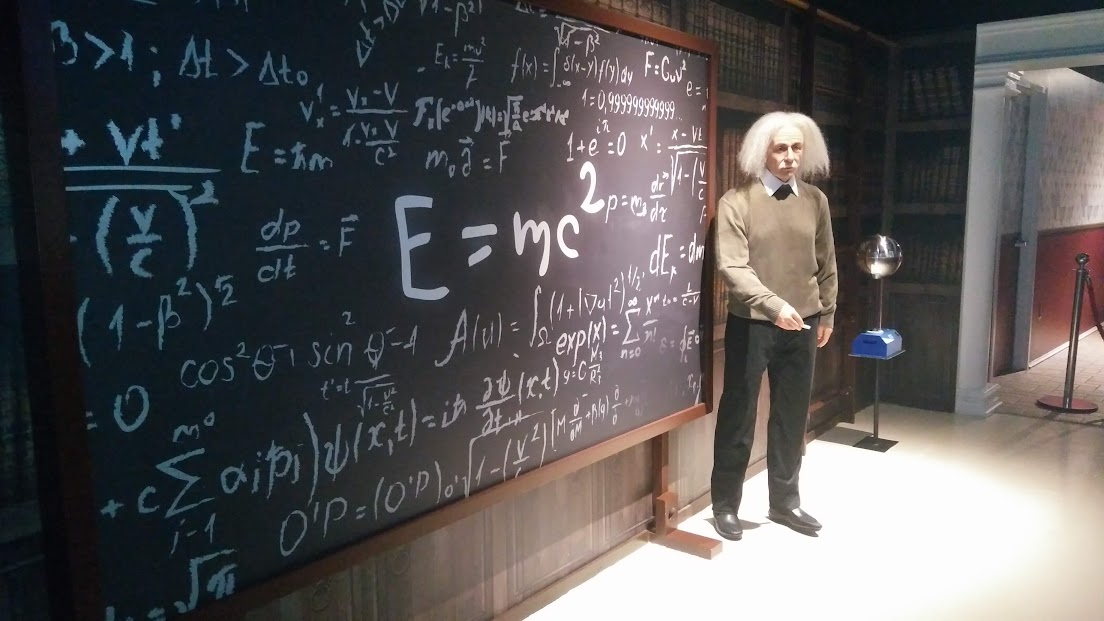 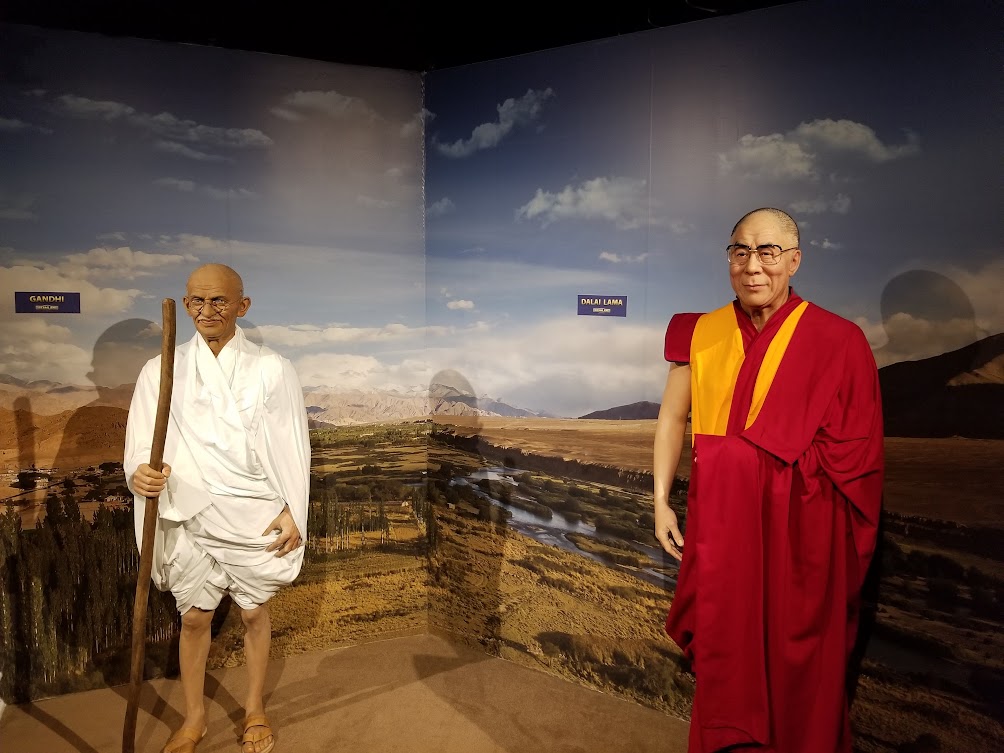 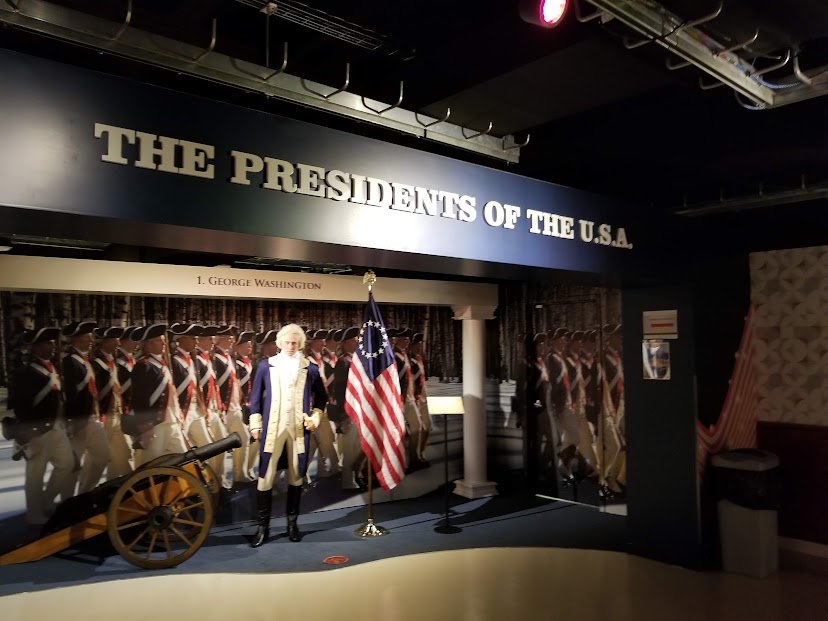 After spending a good amount of time in the wax museum, we walked past Financial District onto Freedom Trail to visit Old State House where the revolution began. It is one of the oldest public buildings in the country. The Old State House is nestled between tall towers of the Financial District, making sure the view of the monument is not blocked. 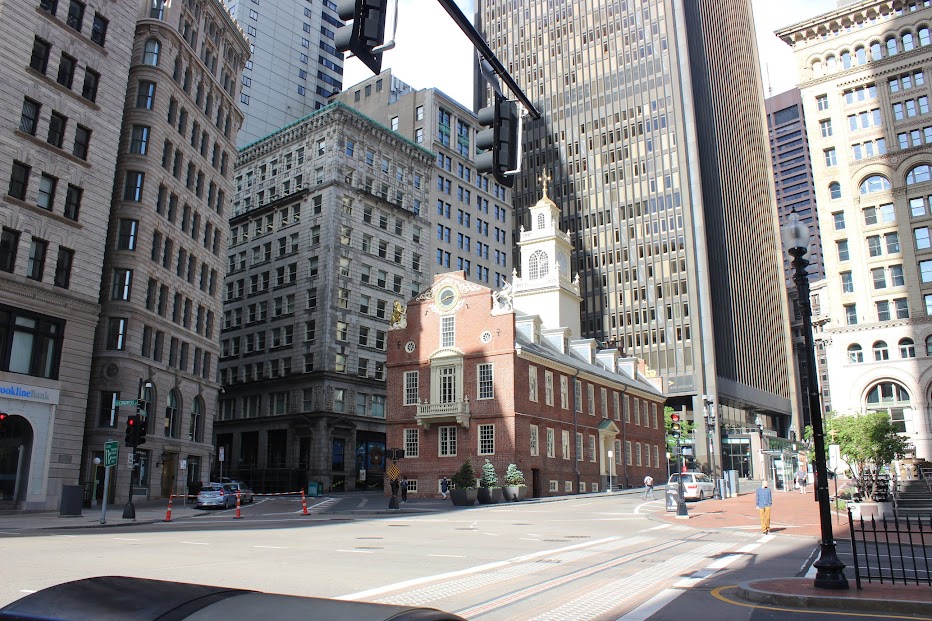 It was time to go back to our hotel, check out and start our journey back to Jersey and we made a quick stop at Prudential Center, a high-end shopping, dining, and entertainment centre at the Back Bay area, very well connected by “T”. 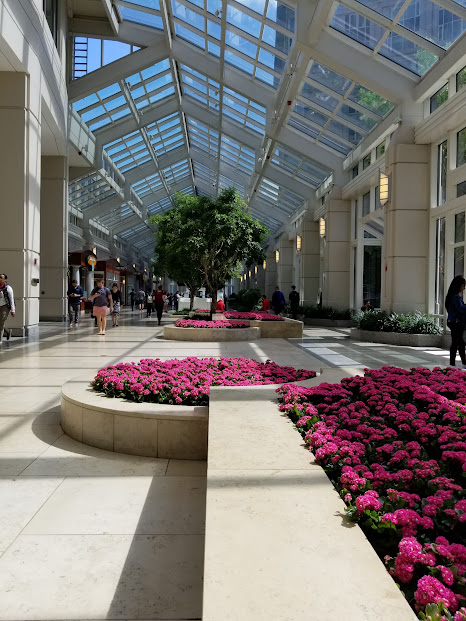 Our weekend combined with my birthday in Boston was a dream. The city just blew me away. I always say some places need a second visit to cover more areas, but Boston is different. I want to move here someday. V, are you reading? God, are you listening? 😉