Hawaii – The second archipelago I was visiting in the US after the Thousand Islands. Located outside the continent in the central Pacific Ocean, Hawaii is the most recent, meaning the 50th state of the United States.

The volcanic Hawaii archipelago consists of eight main islands, of which we were visiting the largest island in the group, often called “The Big Island.” Each island has a different name, collectively are Hawaiian islands. The biggest of them all is called the Hawaii county, nicknamed as “The Big Island.” It was surprising to learn that no ferries are plying between the islands and the predominant method of inter-island travel is by flying.

A 12-hour long flight from NJ took us to Kailua-Kona in The Big Island, from there we drove 1.5 hours to Hilo, on the other end of the island for the night’s stay. Flying into the tropical climate, away from NJ’s biting cold was a welcome change for V and I. We had planned a 3-day getaway to explore the Hawaii county starting with a city tour the following morning. 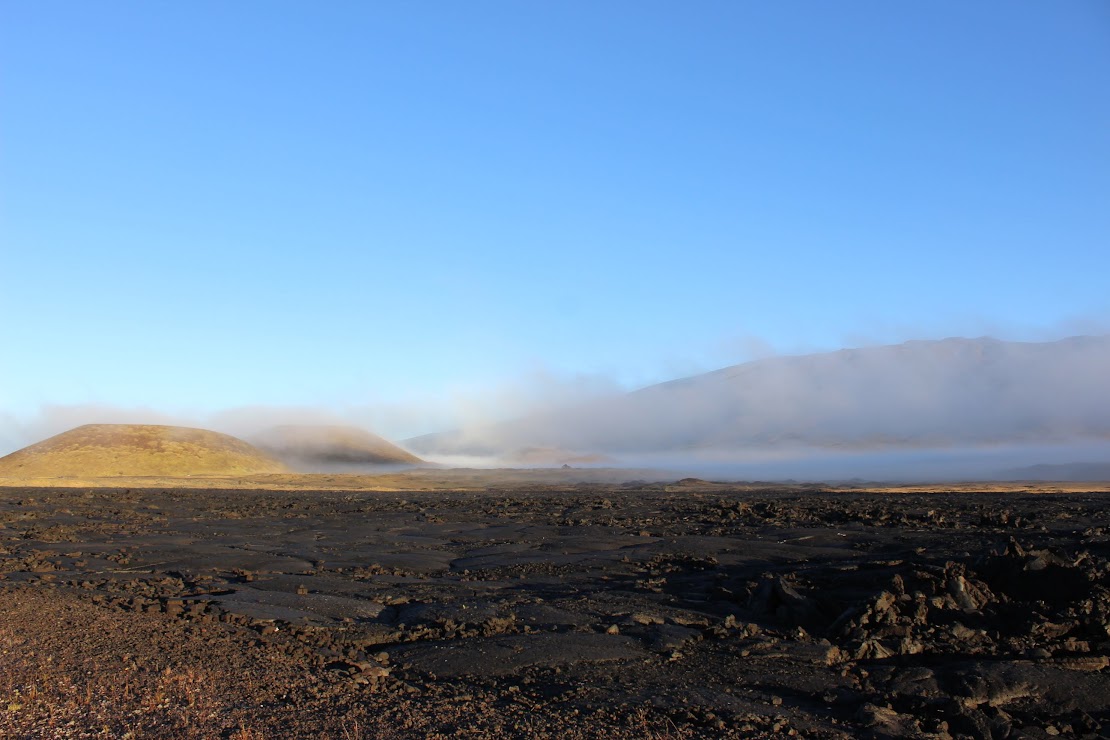 Getting from one place to the other through the beautiful vistas was a delightful experience in itself. No tall towers, no row houses, no traffic, scarce population, didn’t feel like the US. Oh! The mainland madness! I couldn’t stop myself from clicking a zillion pictures knowing full well that pictures don’t do justice to the actual visuals — one for human memory and the other for digital memory. Now let my photos do some talking before I talk about our local sightseeing.

First up, we visited Hamakua, a Macadamia nut factory. An Australian nut introduced to Hawaii by a British investor. Today, a significant part of the state’s food export includes Macadamia nuts. We sampled varieties of flavoured nuts which tasted something like a cross between peanut, almond, and cashew, some sweet, some bitter, a lot of them peppered with spices and Kona coffee to go with, the best coffee I have tasted outside of South India. We learnt that Kona coffee is the most expensive coffee in the US! Hawaii imports almost everything and all plants and animals were brought to Hawaii from different parts of the world. We also got a chance to visit a coffee mill and saw the process of coffee bean extraction. 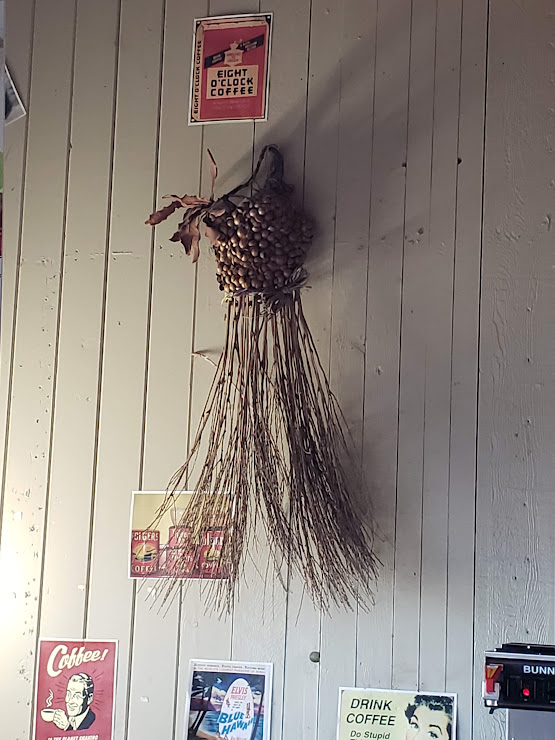 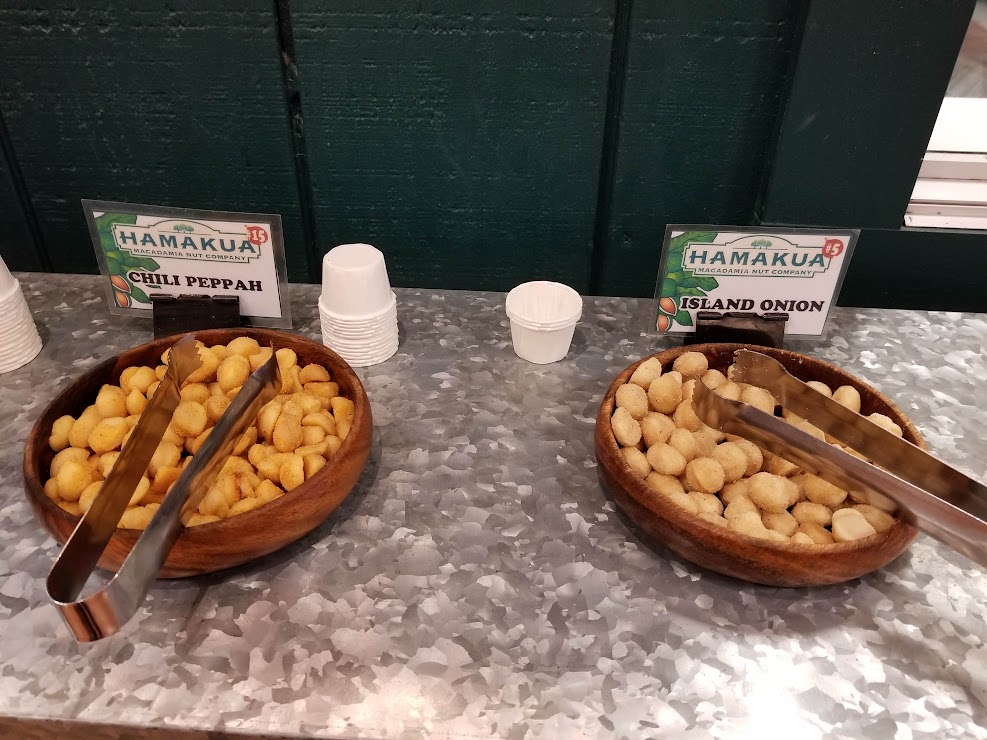 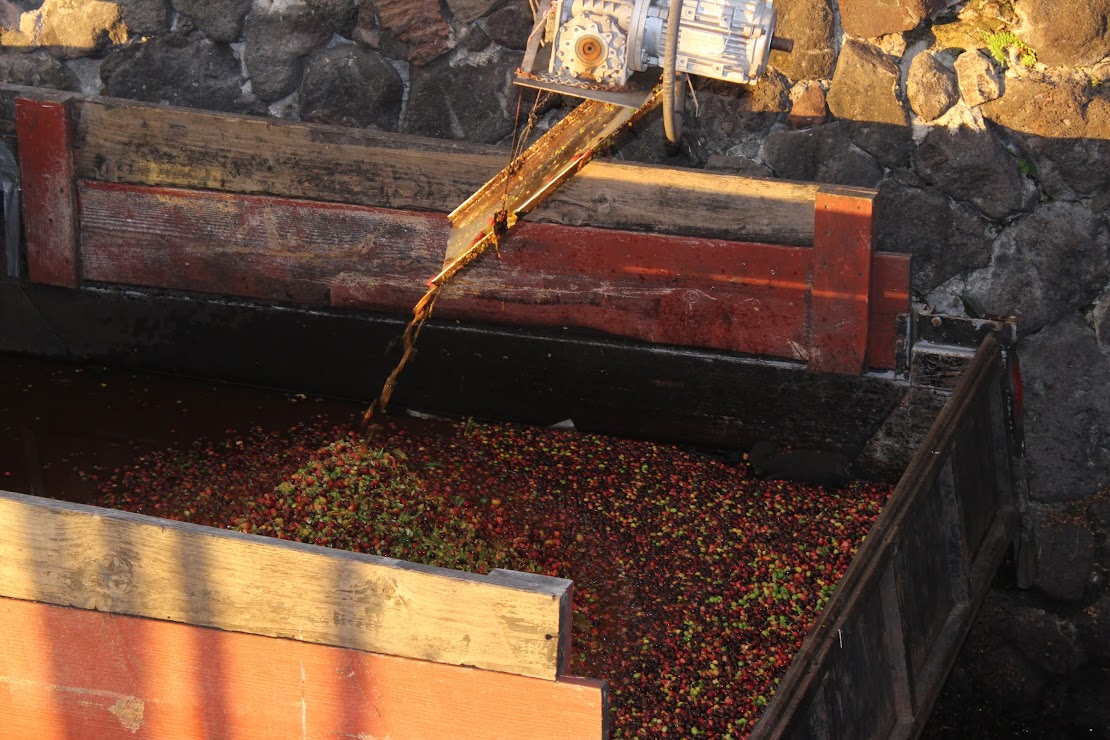 The process of coffee bean extraction

Next up, on our way to the Rainbow waterfalls, we saw Hawaii’s smallest Post office, valleys and other small waterfalls. What caught my eyes was the Hawaiian florae that are very common in India like the Gulmohar, Mango, Orange, Banyan, Coconut, Banana, Lemon, Hibiscus trees in all its vibrancy, something I dearly miss in the North-East USA. Yellow Hibiscus is Hawaii’s state flower. 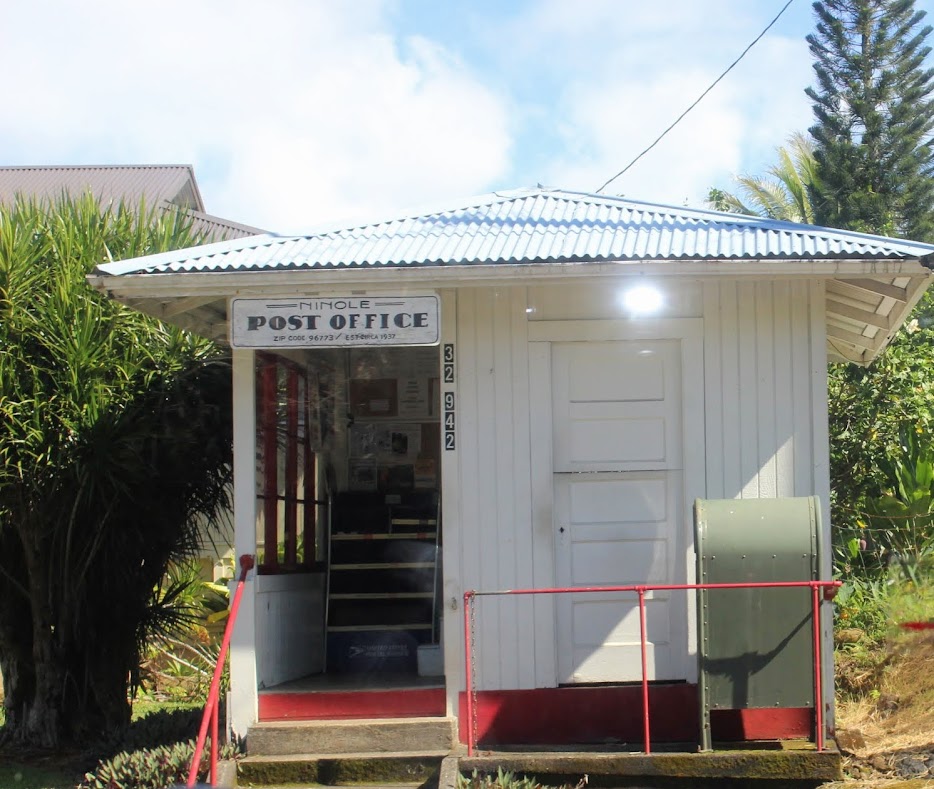 Rainbow waterfall is the Wailuku river rushing over a lava cave into a large pool, blanketed by tropical rainforest. The waterfall gets its name from the rainbow seen in its mist. 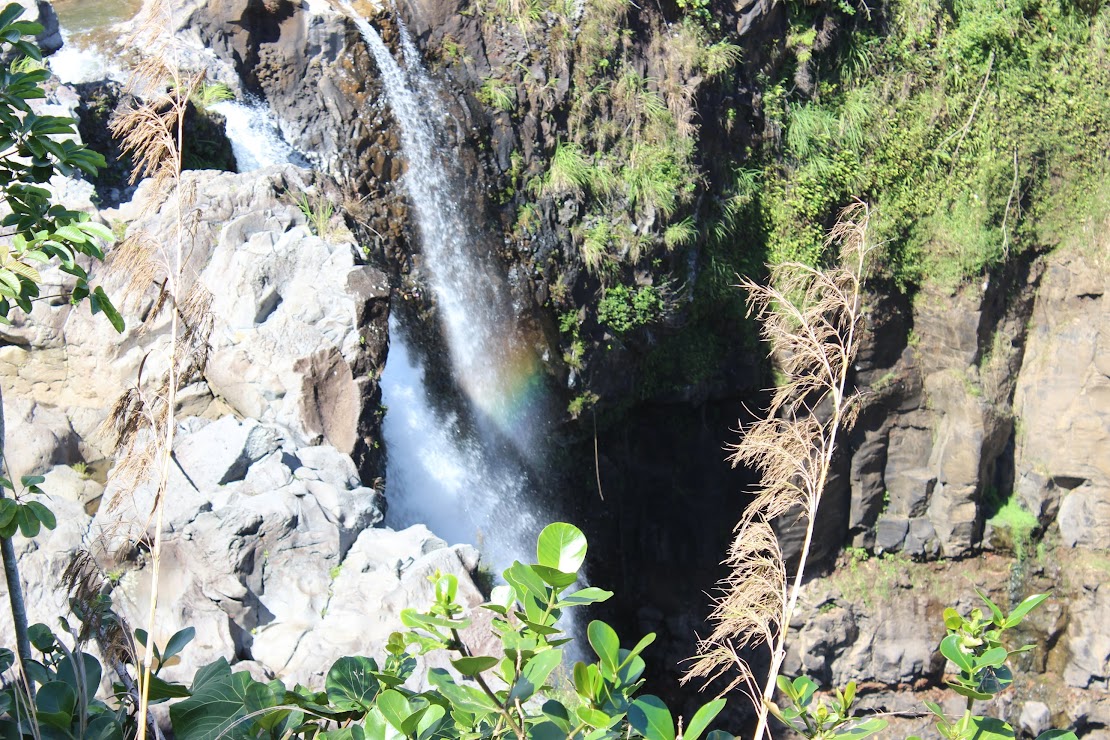 Do you see the rainbow? 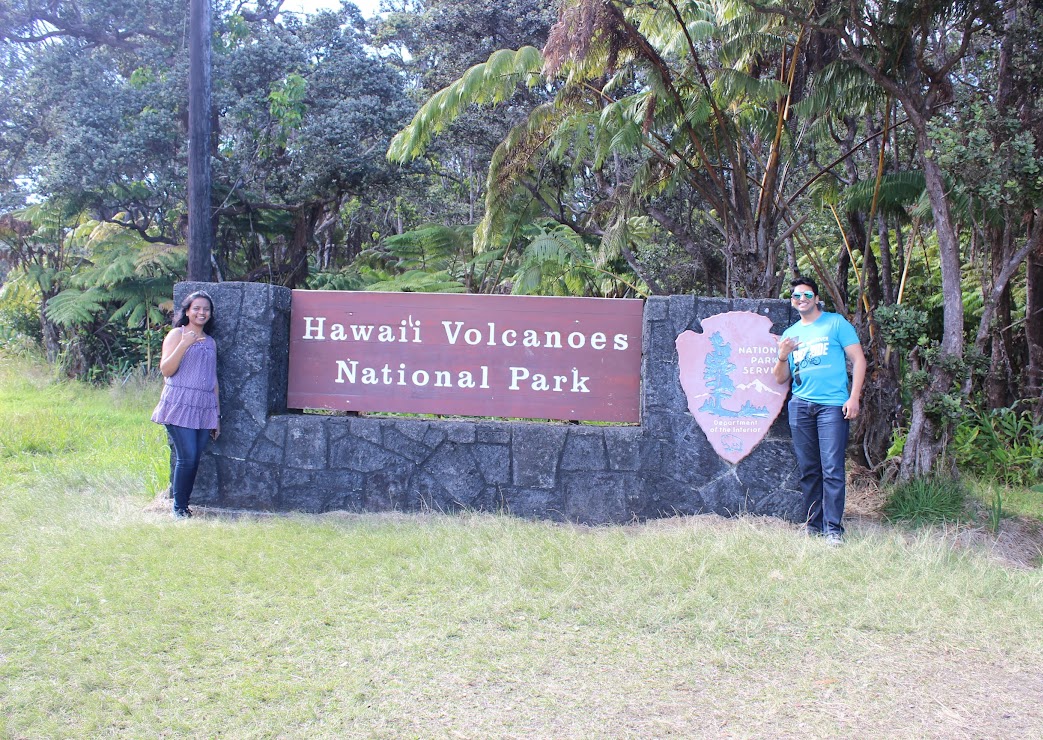 The volcanic activity which formed the Hawaiian islands is not dormant. Few are classified to be extinct; three are still active of which Kilauea and Maunaloa are located in The Big Island.
Standing within the outer caldera, we can see the massive crater of the inner caldera steaming with sulphurous gas. One has to stay on the marked routes and follow all safety instructions while in the National Park. When we were visiting, there were not many Rangers at the site due to Federal shutdown. The National Park has a museum to educate its visitors on the primal process of creation and destruction. Entry to the National Park is free of cost and the visitor centre hours might vary due to volcanic eruption and gasses. 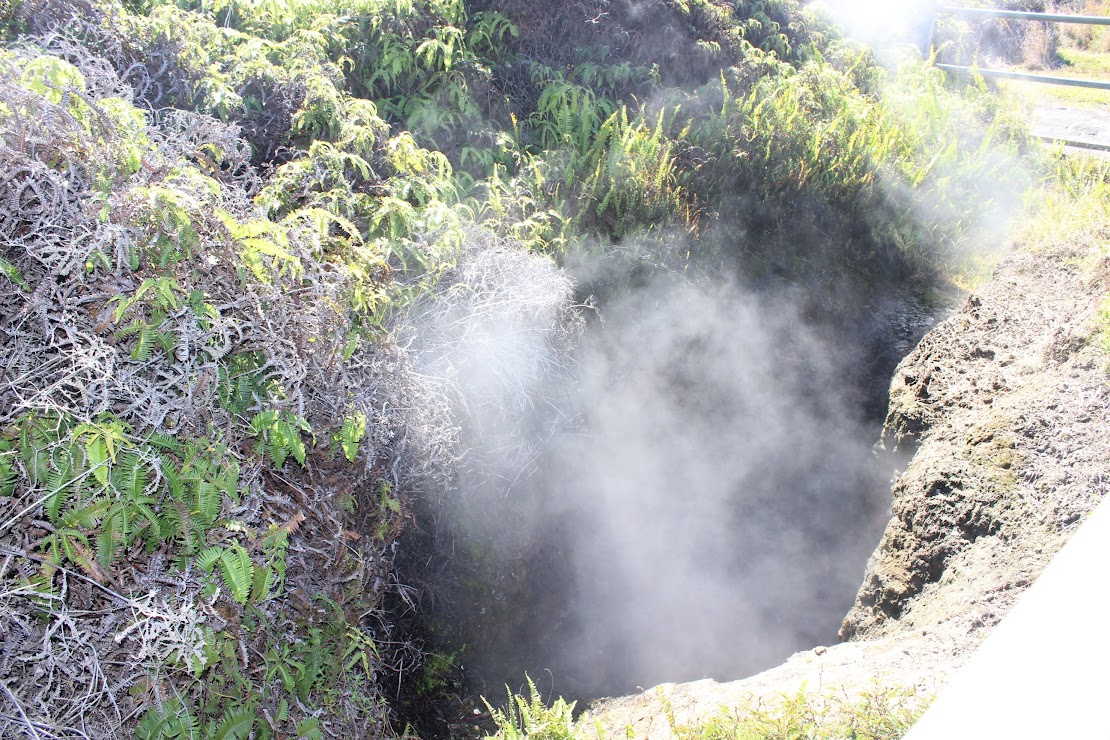 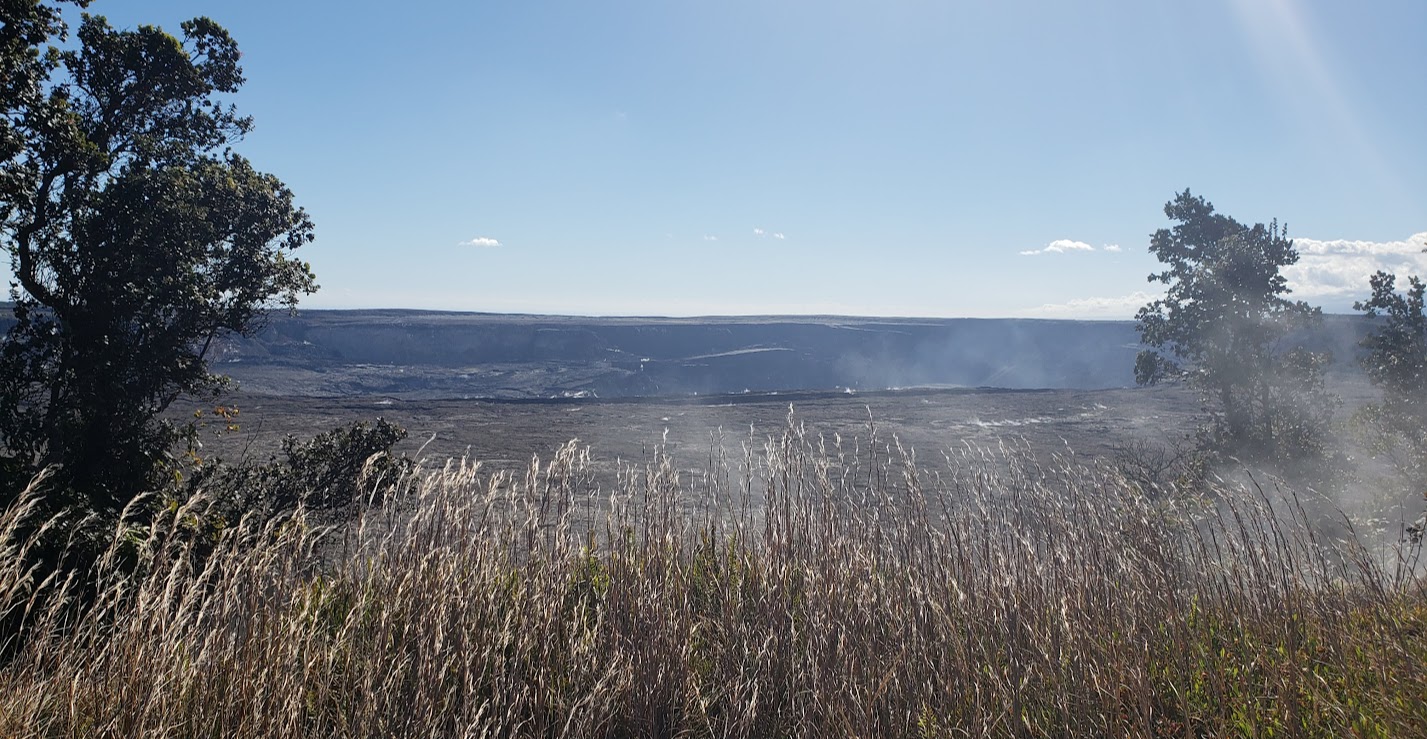 Punalu’u beach translates to Black Sand Beach, formed by lava flowing into the ocean. The beach lined with coconut trees, pitch-black sand, blue sky, even deeper blue ocean water and high tides was a sight to behold. Rare and endangered Honu turtles were seen basking on the beach. One is not allowed to touch or feed the turtles and are to stay 10 feet away from them strictly. The sand was so coarse that it felt more like lava fragments and less like sand. 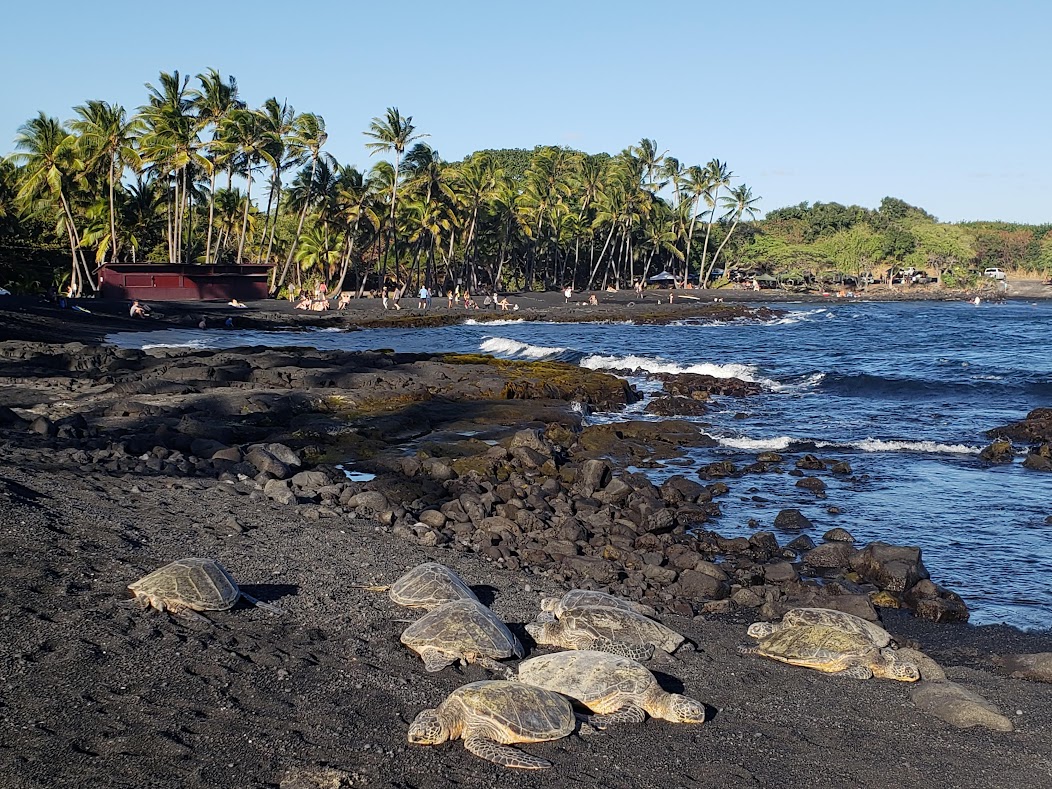 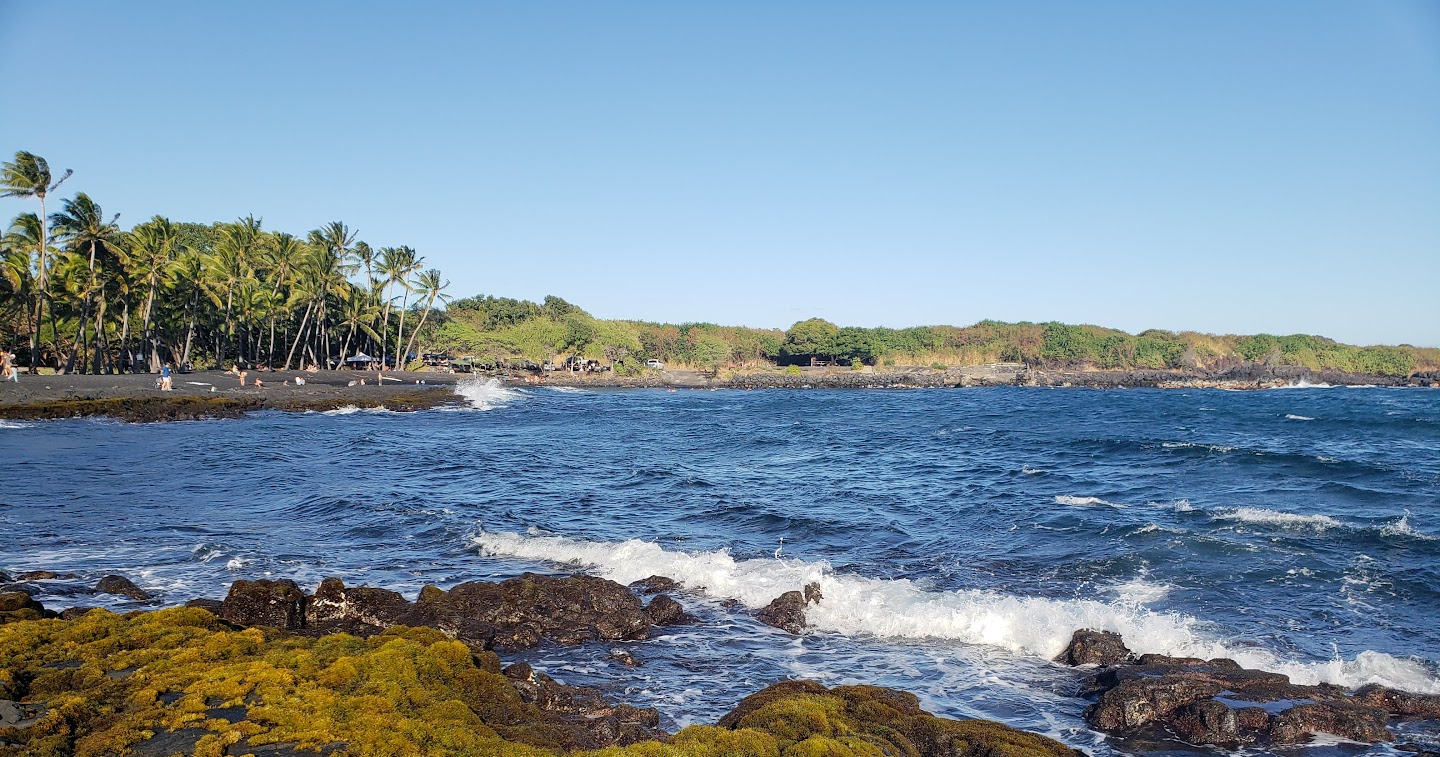 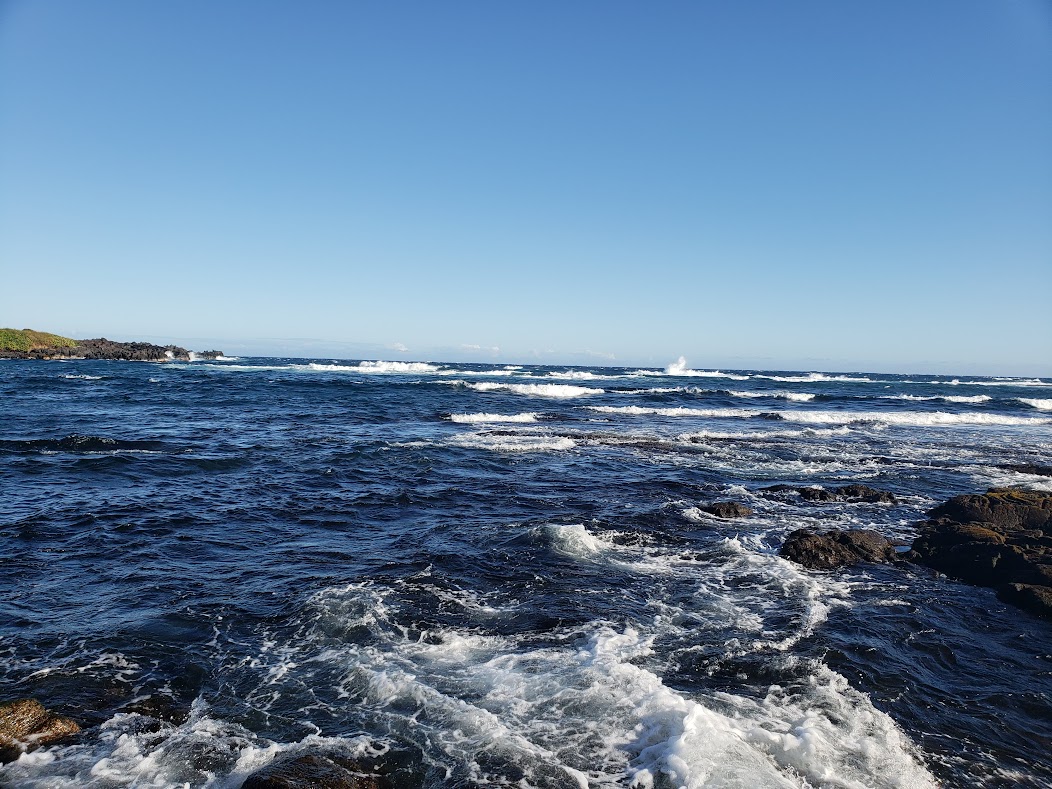 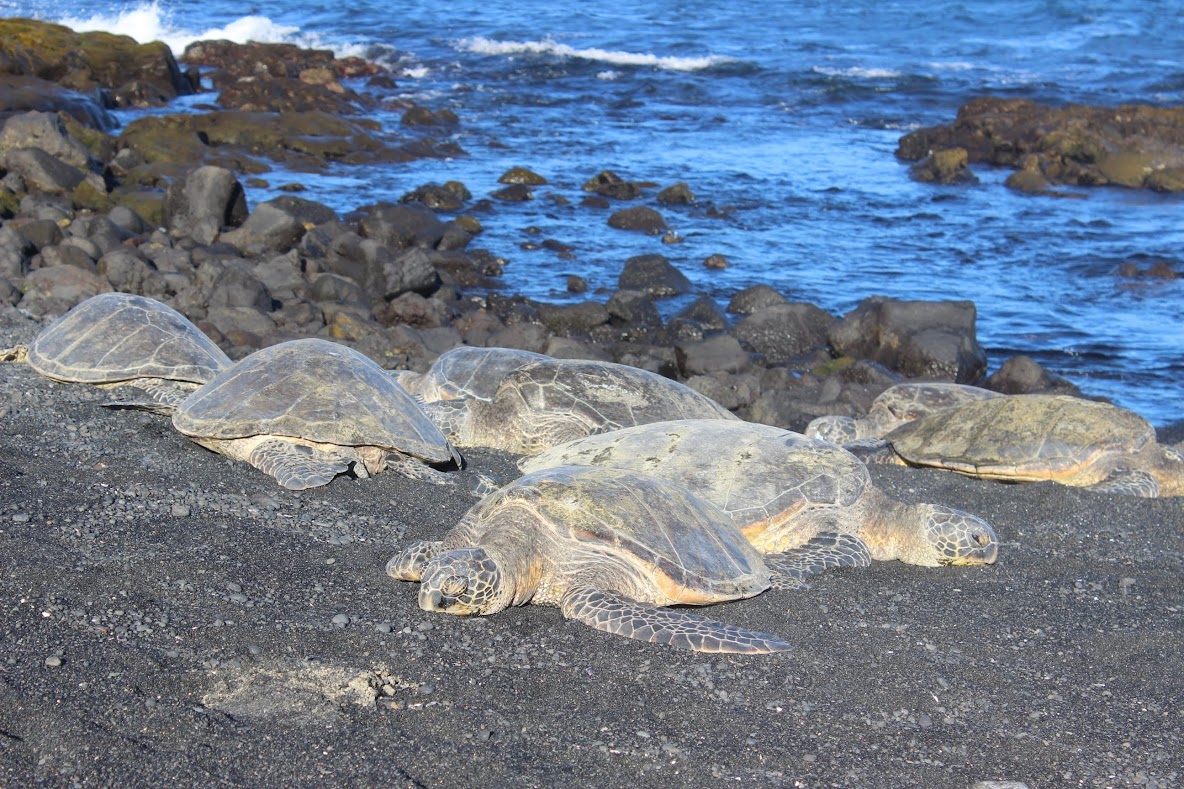 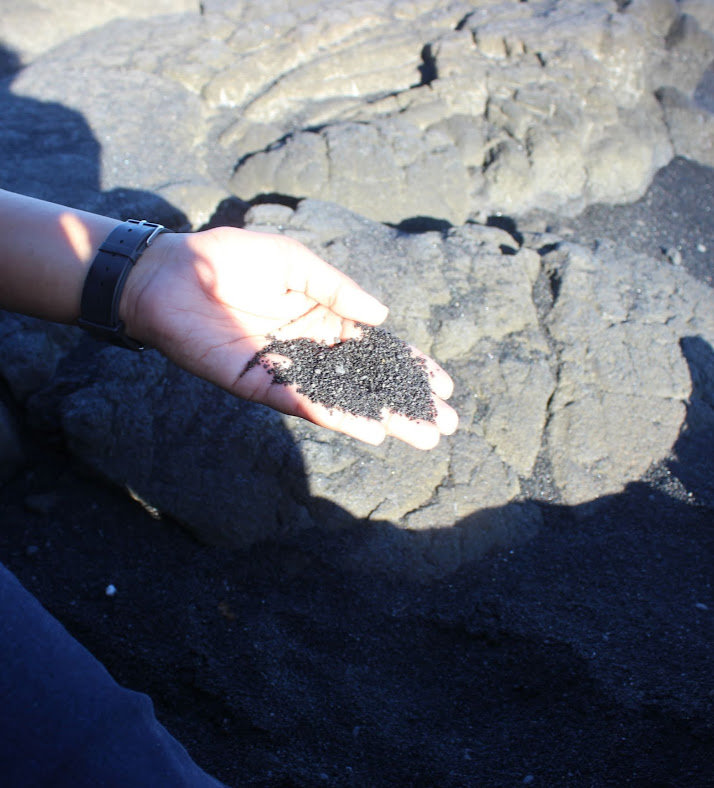 Before calling it a day, we took a stroll through a string light lit lava tube – a natural tunnel within a solidified lava, where molten lava flowed. 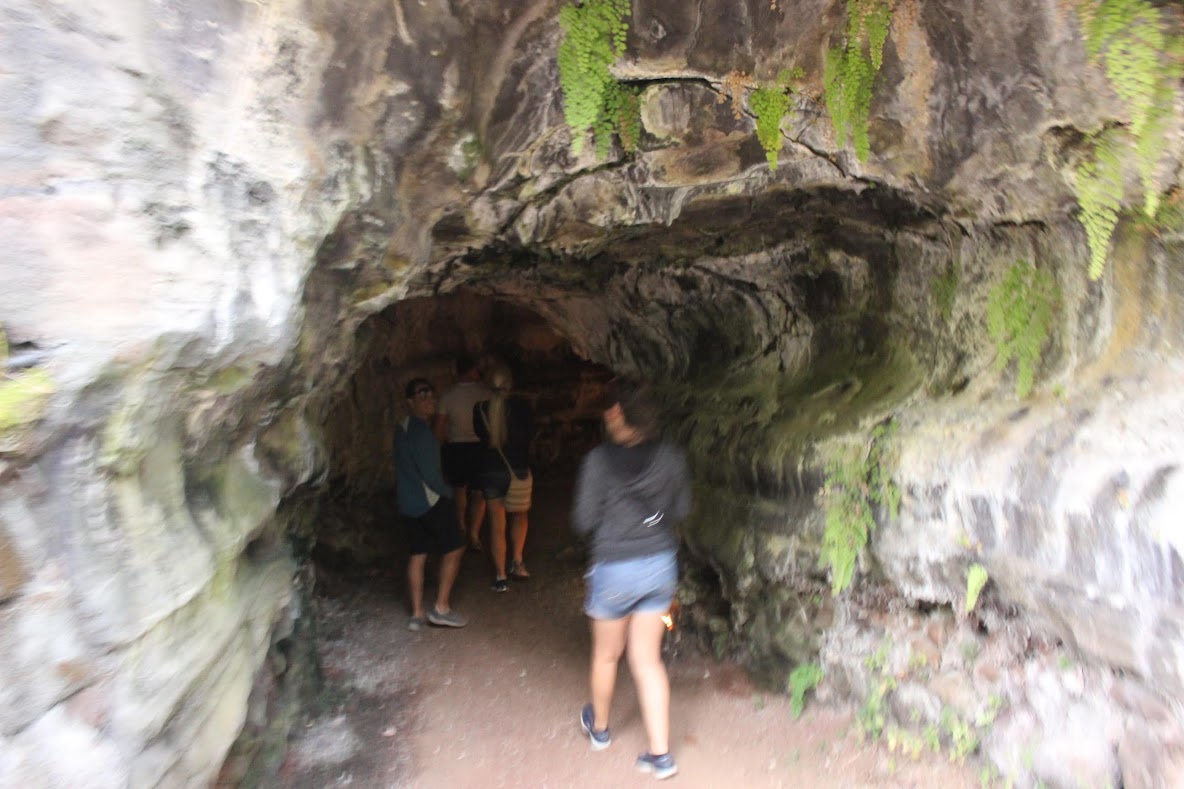 The following morning we were all prepped for our first Snorkeling experience in the Pacific Ocean at Pawai Bay! An hour-long cruise from Kailua-Kona to Pawai Bay along the Kona coast started at 8:30 am. En route, we encountered a pod of wild dolphins. 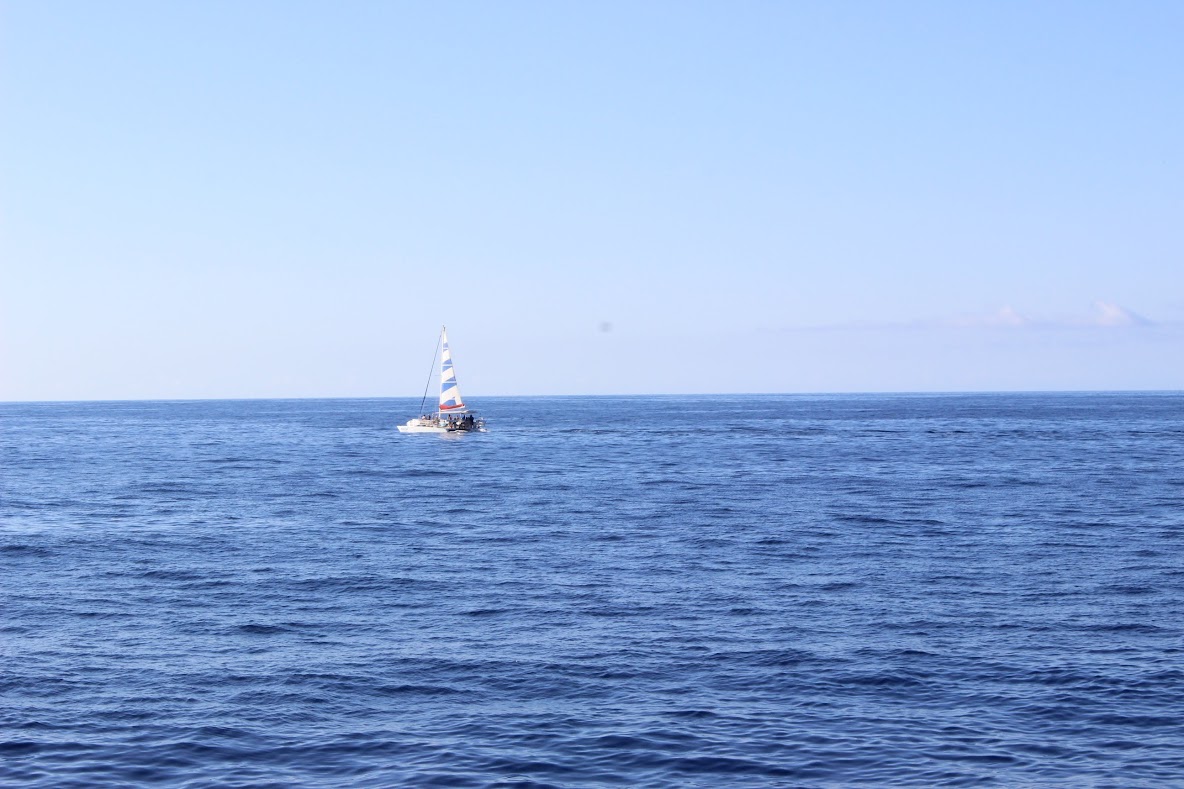 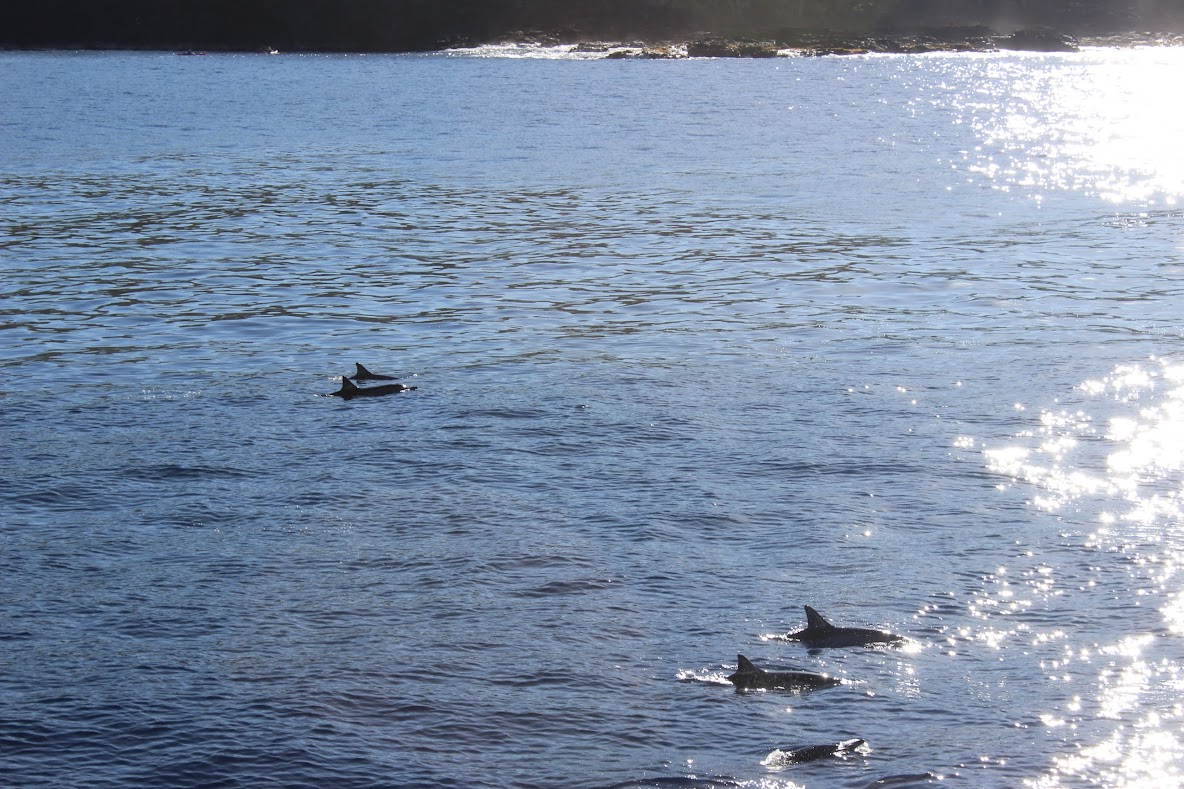 After breakfast and safety instructions, donning fins, mask, and floating gears, we were ready to take a dip to see the coral reef and exquisitely coloured tropical fish. We spent two hours in the water mindless of the time and before we knew it was time to get back on the sail. Snorkelling can be exhausting as much as it is exciting. We promised each other to get fitter and do more of such adventures (with a GoPro to shoot underwater ) in the coming years.

After an adventurous morning, I was looking forward to dusk to witness super blood wolf moon eclipse by the ocean! We plonked on the shore minutes before sundown, camera ready for a red lunar view. It was indeed an experience of a lifetime – a fortunate stroke of serendipity. 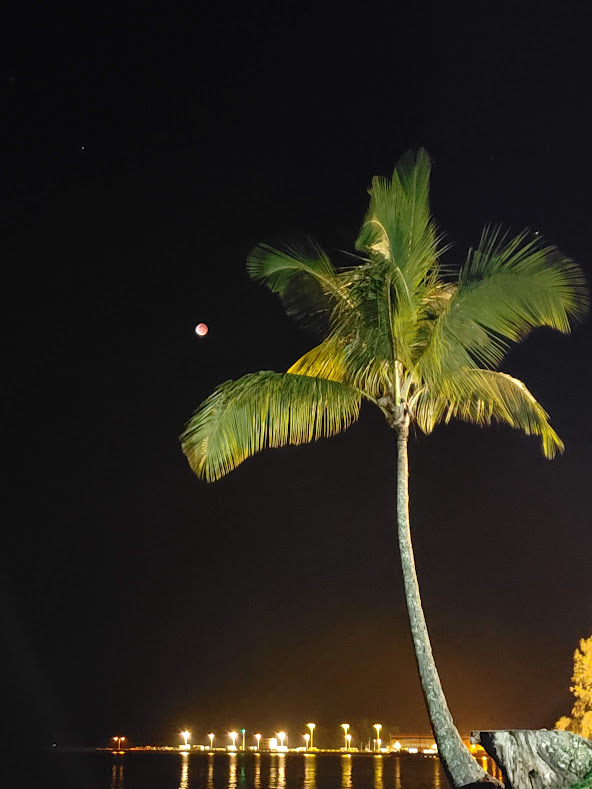 The fascinating thing about the Aloha state is their culture, ‘Ohana’ or the sense of family, blood-related or otherwise. Each calls one another their cousin, waving a ‘shaka’ and a gleeful exchange of ‘Aloha’. It all talks about being bound together as one big family. Nature – sea, shark, fire, and sky are their deities. They have immense respect for their land and its natural conditions.

It’s as if they are in a constant celebration as Hula – their traditional dance signifies. Wearing decorations such as necklaces, bracelets, anklets made of leaves, flowers, and other materials gathered in the forest, and of course a radiant smile, Hula dancers perform to memorised chants, music guiding the steps which are full of hand gestures and facial expressions, what seems to be a methodical story passed down from generations. As they say, ‘Hula is Life’ and legacy of Hawaiians. 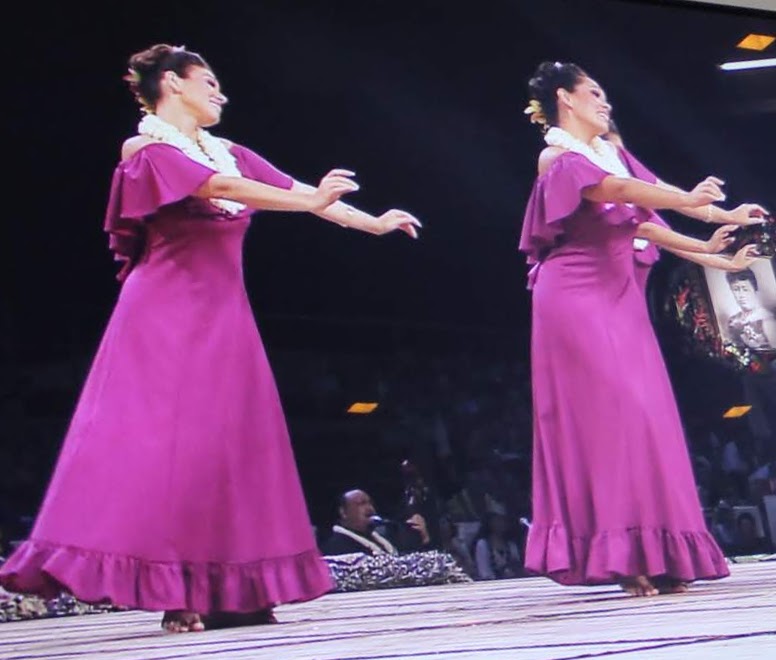 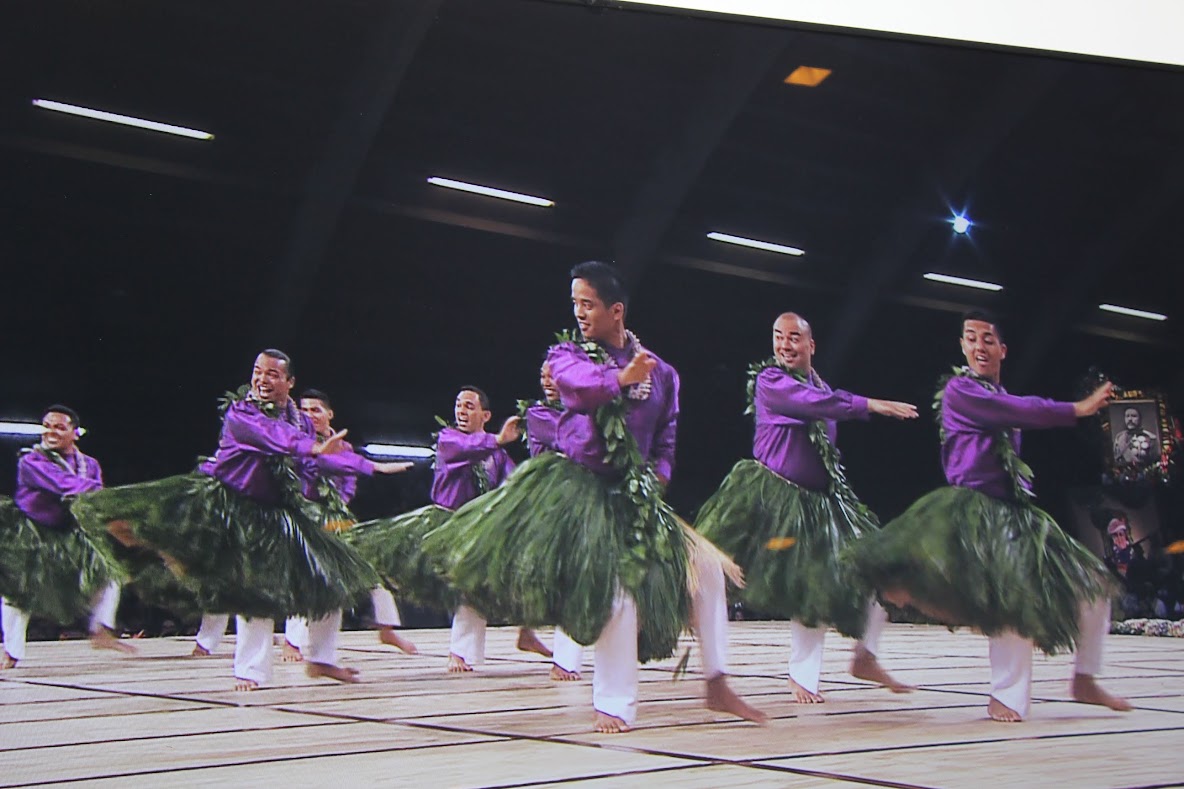 V says no holiday is complete without buying souvenirs for the keepsake. I’m glad I heeded his advise and found some interesting articles such as jewellery made of lava rocks, rare stones extracted from the ocean, black pearl or velvet seeds of Mgambo tree; wooden artefacts, varieties of articles made of different parts of palm trees, and various souvenirs of turtles.

Hawaii is a must visit not just for its scenic beauty but also its culture. I’m game to explore one new island every year, possibly as a winter getaway.
For now, I’ll sign off waving a ‘shaka’. Hoaloha! 🤙

Island spotting from the sky